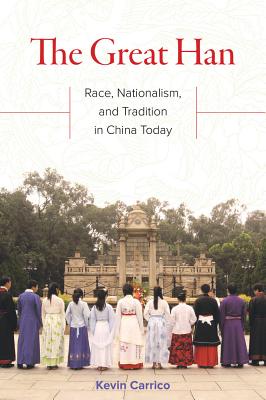 The Great Han: Race, Nationalism, and Tradition in China Today

The Great Han is an ethnographic study of the Han Clothing Movement, a neotraditionalist and racial nationalist movement that has emerged in China since 2001. Participants come together both online and in person in cities across China to revitalize their utopian vision of the authentic Great Han and corresponding real China through pseudotraditional ethnic dress, reinvented Confucian ritual, and anti-foreign sentiment. Analyzing the movement's ideas and practices, this book argues that the vision of a pure, perfectly ordered, ethnically homogeneous, and secure society is in fact a fantasy constructed in response to the challenging realities of the present. Yet this national imaginary is reproduced precisely through its own perpetual elusiveness. The Great Han is a pioneering analysis of Han identity, nationalism, and social movements in a rapidly changing China.
The Great Han: Race, Nationalism, and Tradition in China Today

He is the author of The Great Han: Race, Nationalism, and Tradition in China Today (University of California Press, 2017) and the translator of Tsering Woeser's Tibet on Fire: Self-Immolations against Chinese Rule (Verso Press, 2016). He is currently completing a manuscript on China-Hong Kong relations and the emergence of a Hong Kong independence movement.

Kevin's articles have been published in the China Journal, Nations and Nationalism, Hong Kong Studies, and Asian Cinema. Outside of academia, Kevin's writings have been featured in Foreign Policy, the Age, Hong Kong Free Press, Taipei Times, Voice of Tibet, China Brief, and Anthropology News.