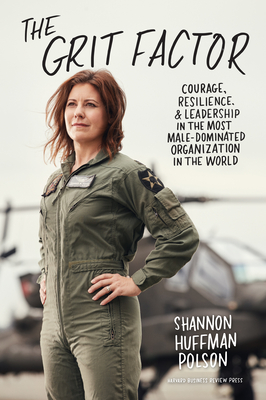 The Grit Factor: Courage, Resilience, and Leadership in the Most Male-Dominated Organization in the World

What does it take for women to succeed in a male-dominated world? The Grit Factor.

At age nineteen, Shannon Huffman Polson became the youngest woman ever to climb Denali, the highest mountain in North America. She went on to reach the summits of Mt. Rainier and Mt. Kilimanjaro and spent more than a decade traveling the world. Yet it was during her experience serving as one of the Army's first female attack helicopter pilots, and eventually leading an Apache flight platoon on deployment to Bosnia-Herzegovina, that she learned the lessons of leadership that forever changed her life.

Where did these insights come from? From her own crucibles of experience—and from other women. In writing The Grit Factor, Polson made it her mission to connect with an elite pack of tough, impressive female iconoclasts who shared with her their candid stories of combat and career. This slate of decorated leaders includes Heather Penney, one of the first female F-16 pilots, who was put on a suicide mission for 9/11; General Ann Dunwoody, the first female four-star general in the Army; Amy McGrath, the first female Marine to fly the F/A-18 in combat and a 2020 candidate for the US Senate—and dozens of other unstoppable women who got there first, including Polson herself.

These women led at the highest levels in the most complicated, challenging, and male-dominated organization in the world. Now, in the post-#MeToo era, when positive role models of women leading are needed as never before, Polson brings these voices together, sharing her own life lessons and theirs with storytelling flair, keen insight, and incisive analysis of current research.

With its gripping narrative and relatable takeaways, The Grit Factor is both inspiring and pragmatic, a book that will energize and enlighten current and aspiring leaders everywhere—whether male or female.

The Grit Factor: Courage, Resilience, and Leadership in the Most Male-Dominated Organization in the World