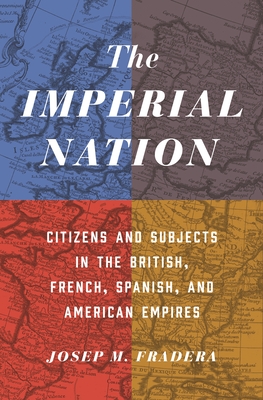 The Imperial Nation: Citizens and Subjects in the British, French, Spanish, and American Empires

How the legacy of monarchical empires shaped Britain, France, Spain, and the United States as they became liberal entities

Historians view the late eighteenth and early nineteenth centuries as a turning point when imperial monarchies collapsed and modern nations emerged. Treating this pivotal moment as a bridge rather than a break, The Imperial Nation offers a sweeping examination of four of these modern powers--Great Britain, France, Spain, and the United States--and asks how, after the great revolutionary cycle in Europe and America, the history of monarchical empires shaped these new nations. Josep Fradera explores this transition, paying particular attention to the relations between imperial centers and their sovereign territories and the constant and changing distinctions placed between citizens and subjects. Fradera argues that the essential struggle that lasted from the Seven Years' War to the twentieth century was over the governance of dispersed and varied peoples: each empire tried to ensure domination through subordinate representation or by denying any representation at all. The most common approach echoed Napoleon's special laws, which allowed France to reinstate slavery in its Caribbean possessions. The Spanish and Portuguese constitutions adopted specialness in the 1830s; the United States used comparable guidelines to distinguish between states, territories, and Indian reservations; and the British similarly ruled their dominions and colonies. In all these empires, the mix of indigenous peoples, European-origin populations, slaves and indentured workers, immigrants, and unassimilated social groups led to unequal and hierarchical political relations. Fradera considers not only political and constitutional transformations but also their social underpinnings. Presenting a fresh perspective on the ways in which nations descended and evolved from and throughout empires, The Imperial Nation highlights the ramifications of this entangled history for the subjects who lived in its shadows.
The Imperial Nation: Citizens and Subjects in the British, French, Spanish, and American Empires

Modern and Contemporary History professor at Universitat Pompeu Fabra in Barcelona (UPF) since 1995.

He is currently coordinating the History PhD programme from the Humanities Department. He is a Contemporary History doctor from Universitat Autònoma de Barcelona (1983). He teaches subjects on colonial and contemporary History of America; Southeast Asian History; Pre-British and British India; compared colonial systems of the European empires from the Early and Late Modern Periods; on the Master in World History in UPF. In addition, he is an ICREA researcher.

These are his highlighted last publications:

The Imperial Nation. Citizens and Subjects in the Empires of Great Britain, France and the United States, (Princeton, 2018).