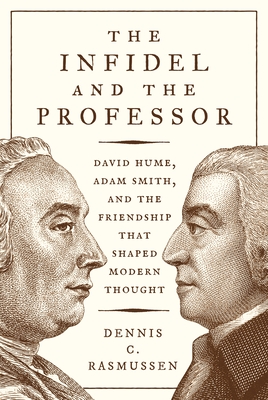 The Infidel and the Professor: David Hume, Adam Smith, and the Friendship That Shaped Modern Thought

David Hume is arguably the most important philosopher ever to have written in English, but during his lifetime he was attacked as the Great Infidel for his religious skepticism and deemed unfit to teach the young. In contrast, Adam Smith, now hailed as the founding father of capitalism, was a revered professor of moral philosophy. Remarkably, Hume and Smith were best friends, sharing what Dennis Rasmussen calls the greatest of all philosophical friendships. The Infidel and the Professor tells the fascinating story of the close relationship between these towering Enlightenment thinkers--and how it influenced their world-changing ideas. It shows that Hume contributed more to economics--and Smith contributed more to philosophy--than is generally recognized. The result is a compelling account of a great friendship that had great consequences for modern thought.

The Infidel and the Professor: David Hume, Adam Smith, and the Friendship That Shaped Modern Thought

Dennis C. Rasmussen is a political theorist whose research focuses on the Enlightenment, the American founding, and the virtues and shortcomings of liberal democracy and market capitalism. He received a Ph.D. from Duke University in 2005 and a B.A. from Michigan State University’s James Madison College in 2000.

Before coming to Syracuse, he held positions at Tufts University, the University of Houston, Brown University and Bowdoin College. He is the author of four books, including “The Infidel and the Professor: David Hume, Adam Smith, and the Friendship That Shaped Modern Thought” (Princeton University Press, 2017), which was shortlisted for the Ralph Waldo Emerson Award and named a best book of the year by The Guardian, Bloomberg, Project Syndicate, Australian Book Review and Five Books.

His most recent book is “Fears of a Setting Sun: The Disillusionment of America's Founders” (Princeton University Press, 2021).