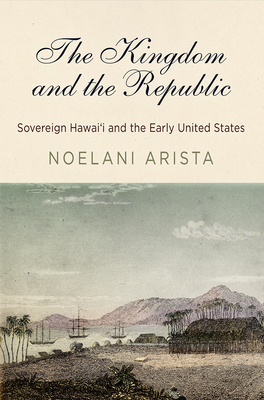 The Kingdom and the Republic: Sovereign Hawai'i and the Early United States

In 1823, as the first American missionaries arrived in Hawai'i, the archipelago was experiencing a profound transformation in its rule, as oral law that had been maintained for hundreds of years was in the process of becoming codified anew through the medium of writing. The arrival of sailors in pursuit of the lucrative sandalwood trade obliged the ali'i (chiefs) of the islands to pronounce legal restrictions on foreigners' access to Hawaiian women. Assuming the new missionaries were the source of these rules, sailors attacked two mission stations, fracturing relations between merchants, missionaries, and sailors, while native rulers remained firmly in charge.

In The Kingdom and the Republic, Noelani Arista (Kanaka Maoli) uncovers a trove of previously unused Hawaiian language documents to chronicle the story of Hawaiians' experience of encounter and colonialism in the nineteenth century. Through this research, she explores the political deliberations between ali'i over the sale of a Hawaiian woman to a British ship captain in 1825 and the consequences of the attacks on the mission stations. The result is a heretofore untold story of native political formation, the creation of indigenous law, and the extension of chiefly rule over natives and foreigners alike.

Relying on what is perhaps the largest archive of written indigenous language materials in North America, Arista argues that Hawaiian deliberations and actions in this period cannot be understood unless one takes into account Hawaiian understandings of the past--and the ways this knowledge of history was mobilized as a means to influence the present and secure a better future. In pursuing this history, The Kingdom and the Republic reconfigures familiar colonial histories of trade, proselytization, and negotiations over law and governance in Hawai'i.

The Kingdom and the Republic: Sovereign Hawai'i and the Early United States

Noelani Arista is a Historian of Hawai?i and the U.S. Her research interests include Hawaiian governance and law, Hawaiian intellectual history, Historiography of Hawai?i, Colonialism and missionization, Native language archives and translation. Her work as a historian seeks to engage the “archives” of Hawaiian language source materials, (the largest indigenous language archive in the U.S.) making primary materials available in Hawaiian and English–in order to write better history.

To this end she is working to develop digital humanities projects focused on the kanikau (Hawaiian laments), Hawaiian governance, and a public project that focuses on understanding “aloha” through mele which began as popular facebook group called 365 days of aloha.

Noelani Arista’s dissertation, “Histories of Unequal Measure: Euro-American Encounters With Hawaiian Governance and Law, 1796-1827,” won the Society of American Historians Allan Nevins Prize, for the best dissertation written on an American Subject. Her work on Hawaiian-U.S.

History has been supported by generous fellowships from Dartmouth College, The University of Pennsylvania (UPENN), The McNeil Center for Early American Studies, The Woodrow-Wilson National Fellowship Foundation, The Mellon Foundation, and the Kohala Center. Arista has served as a member of the Hawaiian Historical Society (2011-2013) and is trustee on the board of the Weetumuw Wôpanâak Charter School working to open the first Wôpanâak immersion school.

Source: University of Hawai?i at M?noa Department of History