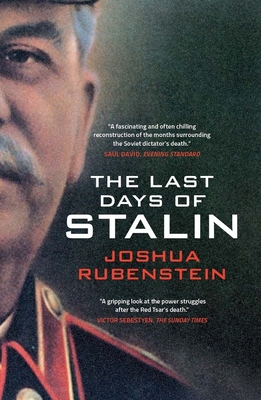 The Last Days of Stalin

Joshua Rubenstein's riveting account takes us back to the second half of 1952 when no one could foresee an end to Joseph Stalin's murderous regime. He was poised to challenge the newly elected U.S. President Dwight Eisenhower with armed force, and was also broadening a vicious campaign against Soviet Jews. Stalin's sudden collapse and death in March 1953 was as dramatic and mysterious as his life. It is no overstatement to say that his passing marked a major turning point in the twentieth century.

The Last Days of Stalin is an engaging, briskly told account of the dictator's final active months, the vigil at his deathbed, and the unfolding of Soviet and international events in the months after his death. Rubenstein throws fresh light on

The Last Days of Stalin

Joshua Rubenstein is Associate Director for Major Gifts at Harvard Law School. He was the Northeast Regional Director of Amnesty International USA for 37 years.

His first book, Soviet Dissidents: Their Struggle for Human Rights, was the first general history of the Soviet dissident movement. Tangled Loyalties, his biography of the controversial Soviet-Jewish writer Ilya Ehrenburg, came out in 1996. Stalin’s Secret Pogrom: The Postwar Inquisition of the Jewish Anti-Fascist Committee, received a National Jewish Book Award.

He then edited The KGB File of Andrei Sakharov and The Unknown Black Book: The Holocaust in the German-Occupied Soviet Territories. His interpretive biography of Leon Trotsky is part of the Jewish Lives Series of Yale University Press. The Last Days of Stalin is his tenth book; it is scheduled to appear in Azeri, Estonian, Greek, Hebrew, Hungarian, Polish, Portuguese, and Ukrainian.