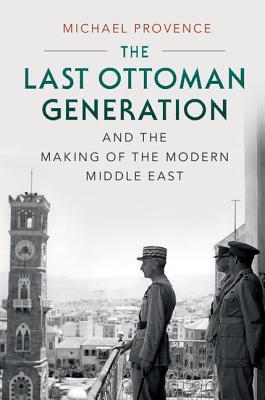 The modern Middle East emerged out of the collapse of the Ottoman Empire, when Britain and France partitioned the Ottoman Arab lands into several new colonial states. The following period was a charged and transformative time of unrest. Insurgent leaders, trained in Ottoman military tactics and with everything to lose from the fall of the Empire, challenged the mandatory powers in a number of armed revolts. This is a study of this crucial period in Middle Eastern history, tracing the period through popular political movements and the experience of colonial rule. In doing so, Provence emphasises the continuity between the late Ottoman and Colonial era, explaining how national identities emerged, and how the seeds were sown for many of the conflicts which have defined the Middle East in the late twentieth and early twenty-first centuries. This is a valuable read for students of Middle Eastern history and politics.
The Last Ottoman Generation and the Making of the Modern Middle East

Michael Provence teaches modern Middle East history, focusing on the 20th century Arab East. He received the Ph.D. from the University of Chicago in 2001. During 2017-2018 he was  Chercheur Résident (Research Fellow in Residence),  Institut d’Etudes Avancées de Nantes, France.  In 2010-11 and 2014 Provence was an Alexander von Humboldt fellow at the Zentrum Moderner Orient in Berlin, Germany.

He is the author of two books and many articles. The books are The Great Syrian Revolt and the Rise of Arab Nationalism (2005), also translated and widely reviewed in Arabic as al-Thawra al-Suriyya al-Wataniyya,  and The Last Ottoman Generation and the Making of the Modern Middle East (2017), selected a Choice Outstanding Academic Title in 2018.

Provence lived and studied over the course of many years in several Middle Eastern countries, particularly Syria and Lebanon between 1998 and 2006. He returns as often as possible.