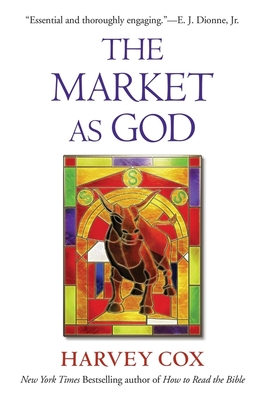 The Market as God

We have fallen in thrall to the theology of supply and demand. According to its acolytes, the Market is omniscient, omnipotent, and omnipresent. It can raise nations and ruin households, and comes complete with its own doctrines, prophets, and evangelical zeal. Harvey Cox brings this theology out of the shadows, demonstrating that the way the world economy operates is shaped by a global system of values that can be best understood as a religion.

Drawing on biblical sources and the work of social scientists, Cox points to many parallels between the development of Christianity and the Market economy. It is only by understanding how the Market reached its divine status that can we hope to restore it to its proper place as servant of humanity.

An essential and thoroughly engaging book...Harvey Cox's ingenious sense of how market theology has developed a scripture, a liturgy, and sophisticated apologetics allow us to see old challenges in a remarkably fresh light.
--E. J. Dionne, Jr.

Cox argues that...we are now imprisoned by the dictates of a false god that we ourselves have created. We need to break free and reclaim our humanity.
--Forbes

Cox clears the space for a new generation of Christians to begin to develop a more public and egalitarian politics.
--The Nation

The Market as God

Harvey Cox is Hollis Research Professor of Divinity at Harvard, where he began teaching in 1965, both at HDS and in the Faculty of Arts and Sciences. An American Baptist minister, he was the Protestant chaplain at Temple University and the director of religious activities at Oberlin College; an ecumenical fraternal worker in Berlin; and a professor at Andover Newton Theological School.

His research and teaching interests focus on the interaction of religion, culture, and politics. Among the issues he explores are urbanization, theological developments in world Christianity, Jewish-Christian relations, and current spiritual movements in the global setting (particularly Pentecostalism).

He has been a visiting professor at Brandeis University, Seminario Bautista de Mexico, the Naropa Institute, and the University of Michigan.

He is a prolific author. His most recent books are How to Read the Bible (HarperCollins, 2015) and Lamentations and the Song of Songs: A Theological Commentary on the Bible (with Stephanie Paulsell; Westminster John Knox Press, 2012).

His Secular City, published in 1965, became an international bestseller and was selected by the University of Marburg as one of the most influential books of Protestant theology in the twentieth century. His other books include The Future of Faith; When Jesus Came to Harvard: Making Moral Decisions Today; The Feast of Fools; The Seduction of the Spirit; Religion in the Secular City; The Silencing of Leonardo Boff: Liberation Theology and the Future of World Christianity; Many Mansions: A Christian's Encounters with Other Faiths; Fire from Heaven: The Rise of Pentecostal Spirituality; The Reshaping of Religion in the Twenty-First Century; and Common Prayers: Faith, Family, and a Christian's Journey through the Jewish Year.