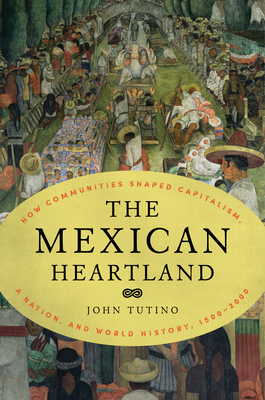 The Mexican Heartland: How Communities Shaped Capitalism, a Nation, and World History, 1500-2000

A major new history of capitalism from the perspective of the indigenous peoples of Mexico, who sustained and resisted it for centuries

The Mexican Heartland provides a new history of capitalism from the perspective of the landed communities surrounding Mexico City. In a sweeping analytical narrative spanning the sixteenth century to today, John Tutino challenges our basic assumptions about the forces that shaped global capitalism--setting families and communities at the center of histories that transformed the world.

Despite invasion, disease, and depopulation, Mexico's heartland communities held strong on the land, adapting to sustain and shape the dynamic silver capitalism so pivotal to Spain's empire and world trade for centuries after 1550. They joined in insurgencies that brought the collapse of silver and other key global trades after 1810 as Mexico became a nation, then struggled to keep land and self-rule in the face of liberal national projects. They drove Zapata's 1910 revolution--a rising that rattled Mexico and the world of industrial capitalism. Although the revolt faced defeat, adamant communities forced a land reform that put them at the center of Mexico's experiment in national capitalism after 1920. Then, from the 1950s, population growth and technical innovations drove people from rural communities to a metropolis spreading across the land. The heartland urbanized, leaving people searching for new lives--dependent, often desperate, yet still pressing their needs in a globalizing world.

A masterful work of scholarship, The Mexican Heartland is the story of how landed communities and families around Mexico City sustained silver capitalism, challenged industrial capitalism--and now struggle under globalizing urban capitalism.

The Mexican Heartland: How Communities Shaped Capitalism, a Nation, and World History, 1500-2000

I am a teacher and historian of Mexico in the context of the Americas and the World. I aim to understand the histories of popular communities as they engaged colonial rule and early capitalism, national states and industrial challenges, revolutionary promises and national development--and now the unprecedented uncertainties of globalization and explosive urbanism.

In the process, I search for ways to integrate studies of the environment, production, and state power with an emphasis on labor, ethnic, and gender relations, and on the cultural constructions that debate everything. In other words, I study Mexican communities seeking a more integrated history--and and I try to explore that history over the long run and in global context. To bring those perspectives into the classroom, for undergraduates I teach the historical foundations of Latin America, 1400-1800, as well as the history of Mexico, its revolutions, and its integrations with the United States.

With graduate students, my courses focus on exploring the diversity of the Americas as they engaged the world after 1500, and the History of Mexico and its diverse communities, rural and urban, from the colonial period through the present. I try to rethink with students at all levels the roots of global capitalism in the Americas before 1880, the transformations that marginalized Latin America in the industrial era after 1800, the experiments in national development after 1910, and the coming of globalization.

My emphasis is not just that global powers have shaped communities across Mexico and the Americas, but that those communities have created the modern world--and thus their own worlds--in ways ranging from adaptation to negotiation to revolution--and migration. My primary comparative interests focus on Central America and the Caribbean, Brazil, and increasingly the United States--all viewed in global contexts.

When I leave the department (which my family knows is not often enough) my goal is to get to the Bay, the ocean, or the mountains--to exhale and remember that nature still rules, if only we will allow her. Finally, I am a long suffering citizen of the Red Sox Nation (yet open enough to accept a committed Yankees fan as a doctoral student). Recent triumphs threw the world into disarray. We of the Nation have lived knowing that the best of people will repeatedly fight the good fight--and despite valiant efforts, always fall short of victory.

We have no idea how to live in the glow of victory. Recent difficulties tell me the world stays its course.