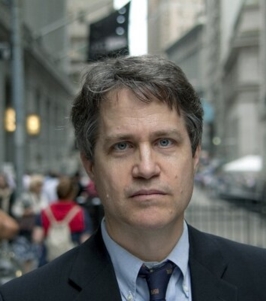 The Monster: How a Gang of Predatory Lenders and Wall Street Bankers Fleeced America--and Spawned a Global Crisis

Michael Hudson is a senior editor at at the International Consortium of Investigative Journalists. His two decades of work on mortgage and banking fraud has prompted critics to call him the reporter "who beat the world on subprime abuses," the "guru of all things predatory lending" and "the Woodward/Bernstein of the mortgage crisis."

Previously, he worked previously as a reporter for the Wall Street Journal and the Roanoke (Va.) Times. He has also written for Forbes, the New York Times, the Los Angeles Times, the Washington Post and Mother Jones.

His work has won many honors, including a George Polk Award for magazine reporting, a John Hancock Award for business journalism, an Investigative Reporters and Editors Award, a SPJ/Sigma Delta Chi Award and accolades from the National Press Club, the White House Correspondents' Association, the American Bar Association, New York Press Club and the New York State Society of CPAs.

He edited the award-winning book Merchants of Misery and appeared in the documentary film Maxed Out. His latest book, THE MONSTER: How a Gang of Predatory Lenders and Wall Street Bankers Fleeced America--and Spawned a Global Crisis, was named 2010 Book of the Year by Baltimore City Paper and called "essential reading for anyone concerned with the mortgage crisis" by Library Journal.

His 2011 series of stories for the Center for Public Integrity, "The Great Mortgage Cover-Up," was selected to appear in Columbia University Press's Best Business Writing 2012.