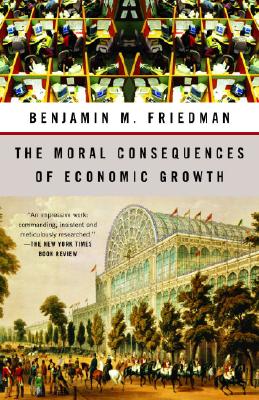 The Moral Consequences of Economic Growth

From the author of Day of Reckoning, the acclaimed critique of Ronald Reagan's economic policy (Every citizen should read it, said The New York Times): a persuasive, wide-ranging argument that economic growth provides far more than material benefits.

In clear-cut prose, Benjamin M. Friedman examines the political and social histories of the large Western democracies-particularly of the United States since the Civil War-to demonstrate the fact that incomes on the rise lead to more open and democratic societies. He explains that growth, rather than simply a high standard of living, is key to effecting political and social liberalization in the third world, and shows that even the wealthiest of nations puts its democratic values at risk when income levels stand still. Merely being rich is no protection against a turn toward rigidity and intolerance when a country's citizens lose the sense that they are getting ahead.

With concrete policy suggestions for pursuing growth at home and promoting worldwide economic expansion, this volume is a major contribution to the ongoing debate about the effects of economic growth and globalization.

The Moral Consequences of Economic Growth