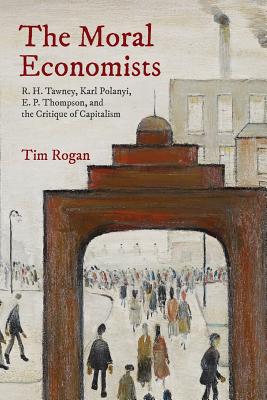 What's wrong with capitalism? Answers to that question today focus on material inequality. Led by economists and conducted in utilitarian terms, the critique of capitalism in the twenty-first century is primarily concerned with disparities in income and wealth. It was not always so. The Moral Economists reconstructs another critical tradition, developed across the twentieth century in Britain, in which material deprivation was less important than moral or spiritual desolation.

Tim Rogan focuses on three of the twentieth century's most influential critics of capitalism--R. H. Tawney, Karl Polanyi, and E. P. Thompson. Making arguments about the relationships between economics and ethics in modernity, their works commanded wide readerships, shaped research agendas, and influenced public opinion. Rejecting the social philosophy of laissez-faire but fearing authoritarianism, these writers sought out forms of social solidarity closer than individualism admitted but freer than collectivism allowed. They discovered such solidarities while teaching economics, history, and literature to workers in the north of England and elsewhere. They wrote histories of capitalism to make these solidarities articulate. They used makeshift languages of tradition and custom to describe them until Thompson patented the idea of the moral economy. Their program began as a way of theorizing everything economics left out, but in challenging utilitarian orthodoxy in economics from the outside, they anticipated the work of later innovators inside economics.

Examining the moral cornerstones of a twentieth-century critique of capitalism, The Moral Economists explains why this critique fell into disuse, and how it might be reformulated for the twenty-first century.

Tim Rogan is a barrister at Banco Chambers in Sydney. His first book, The Moral Economists: Karl Polanyi, E. P. Thompson, R. H. Tawney and the Critique of Capitalism (Princeton, 2018), explores the emergence out of liberalism’s first great crisis of an historically-grounded but future-facing analysis of capitalism emphasizing moral costs over material inequities. He was formerly a fellow and lecturer in history at St. Catharine’s College, Cambridge.

Prior to coming to the bar, Tim was a fellow and lecturer in history at St. Catharine’s College, Cambridge. He received an MPhil and PhD in history from the University of Cambridge in 2013, where he was a Cambridge Australia Scholar. He received his BA and LLB (with first class honours) from the University of Melbourne in 2006. He previously completed articles of clerkship at Minter Ellison in Melbourne.