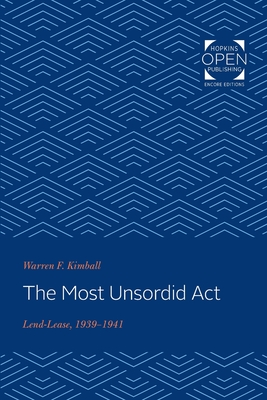 Originally published in 1969. In The Most Unsordid Act, Warren Kimball provides a history of the Lend-Lease idea. The genesis and development of the Lend-Lease idea, although spanning less than two years, offers a subject of the broadest significance for major questions of democratic government and society. The story begins with the United States' growing recognition of the British monetary and gold shortage and ends with the passage of the Lend-Lease Act and the American commitment that it involved. Dr. Kimball's narrative--chronological, detailed, and dramatic--includes analyses of the domestic and international concerns on both sides of the Atlantic and of the roles of the leading protagonists: President F. D. Roosevelt and Treasury Secretary Morgenthau, as well as Stimson, Hull, Churchill, and key British representatives. He also examines the possibility that Lend-Lease was designed to benefit the American economy at Britain's expense. A central question animates Kimball's account: How could a president who recognized the ultimate threat of Nazi Germany, but shared his nation's desire to avoid war, find a way to help an ally?
The portrait of Roosevelt that emerges is instructive in view of revisionist histories that present him as a Machiavellian figure disingenuously leading his country to war. Kimball sees him, rather, as an essentially domestic president whose experiences and interests evolved from national concerns--as a man unschooled in international affairs, eager to avoid confrontation with his congressional opposition, wary of the British penchant for power politics, given to procrastination when faced with difficult problems, and anxious to avoid full-scale war. Yet, the administration's legislative strategy and the debate over the Lend-Lease Act clearly demonstrated that the president, his closest advisers, and the Congress were aware that the legislation would inevitably mean war with Germany.
Based on such sources as the diaries of Morgenthau, the State Department Archives, Foreign Economic Administration records, the Stimson papers, and interviews with participants, this study provides insights that raise central questions about the functioning of the American system of government.

Warren F. Kimball, is the author of Forged in War: Roosevelt, Churchill, and the Second World War (1997), The Juggler: Franklin Roosevelt as Wartime Statesman (1991), and books on the Morgenthau Plan for Germany and the origins of Lend-Lease.  He edited Churchill & Roosevelt: The Complete Correspondence (3 vols.,1984).

His over 50 essays on Churchill, Roosevelt the era of the Second World War have popped up like dandelions in the spring, most recently in a published collection of co-edited essays, FDR's World: War, Peace, and Legacies (2008).  He is an academic adviser to the Churchill Centre, and senior editor for the Churchill journal, Finest Hour.

He chaired and served on the State Department Historical Advisory Committee, 1990-2003, and chair of the Secretary of State’s Review Panel on the Historical Office Issues in 2008-09.

While he still tries to unwrap the true "riddle wrapped in a mystery inside an enigma" (FDR), and still is sifting the evidence as to whether or not Sir Winston ever really "smoked" that cigar B he is writing an institutional history of the US Tennis Association and is The USTA Historian.

He is Robert Treat Professor of History (emeritus) from Rutgers University -- where he taught for 32 years, was Pitt Professor at Cambridge University, 1987-88, and Visiting Distinguished Professor at The Citadel, 2002-04.  He held two fellowships at Corpus Christi College and was a Churchill Archive Fellow, both at Cambridge.