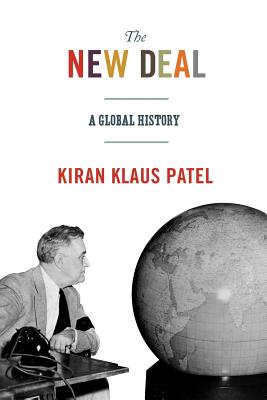 The New Deal: A Global History

The first history of the new deal in global context

The New Deal: A Global History provides a radically new interpretation of a pivotal period in US history. The first comprehensive study of the New Deal in a global context, the book compares American responses to the international crisis of capitalism and democracy during the 1930s to responses by other countries around the globe--not just in Europe but also in Latin America, Asia, and other parts of the world. Work creation, agricultural intervention, state planning, immigration policy, the role of mass media, forms of political leadership, and new ways of ruling America's colonies--all had parallels elsewhere and unfolded against a backdrop of intense global debates.

By avoiding the distortions of American exceptionalism, Kiran Klaus Patel shows how America's reaction to the Great Depression connected it to the wider world. Among much else, the book explains why the New Deal had enormous repercussions on China; why Franklin D. Roosevelt studied the welfare schemes of Nazi Germany; and why the New Dealers were fascinated by cooperatives in Sweden--but ignored similar schemes in Japan.

Ultimately, Patel argues, the New Deal provided the institutional scaffolding for the construction of American global hegemony in the postwar era, making this history essential for understanding both the New Deal and America's rise to global leadership.

The New Deal: A Global History

Before joining Maastricht University, I was a Joint Chair at the European University Institute in Florence, Italy (2007-2011; Department of History and Robert Schuman Centre for Advanced Studies) and an assistant professor at Humboldt University in Berlin (2002-2006).

Inter alia, I have been a Kennedy Fellow at the Center for European Study at Harvard University, a visiting professor at the Ecole des Hautes Etudes en Sciences Sociales, the German Historical Institute London, the London School of Economics, Sciences Po Paris, as well as a senior visiting fellow at the Freiburg Institute for Advanced Studies, the Free University in Berlin and the University of Oxford.

Presently, I am also member of an international team of historians researching the history of the German Ministry of Labor during the Third Reich. Also see my latest book Projekt Europa. Eine kritische Geschichte as an analysis of European integration history.

I am a member of the editorial boards of Contemporary European History; Geschichte und Gesellschaft; the Journal of European Integration History; Monde(s): Histoire, Espaces, Relations; New Global Studies; Ventunesimo secolo and Docupedia Zeitgeschichte. I have supervised some 20 doctoral dissertations, at Humboldt University in Berlin, at the European University Institute in Florence, and at Maastricht University. My ongoing research projects focus on the history of European integration as well as on the history of the United States in the world.