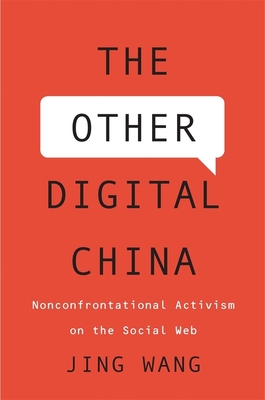 The Other Digital China: Nonconfrontational Activism on the Social Web

A scholar and activist tells the story of change makers operating within the Chinese Communist system, whose ideas of social action necessarily differ from those dominant in Western, liberal societies.

The Chinese government has increased digital censorship under Xi Jinping. Why? Because online activism works; it is perceived as a threat in halls of power. In The Other Digital China, Jing Wang, a scholar at MIT and an activist in China, shatters the view that citizens of nonliberal societies are either brainwashed or complicit, either imprisoned for speaking out or paralyzed by fear. Instead, Wang shows the impact of a less confrontational kind of activism. Whereas Westerners tend to equate action with open criticism and street revolutions, Chinese activists are building an invisible and quiet coalition to bring incremental progress to their society.

Many Chinese change makers practice nonconfrontational activism. They prefer to walk around obstacles rather than break through them, tactfully navigating between what is lawful and what is illegitimate. The Other Digital China describes this massive gray zone where NGOs, digital entrepreneurs, university students, IT companies like Tencent and Sina, and tech communities operate. They study the policy winds in Beijing, devising ways to press their case without antagonizing a regime where taboo terms fluctuate at different moments. What emerges is an ever-expanding networked activism on a grand scale. Under extreme ideological constraints, the majority of Chinese activists opt for neither revolution nor inertia. They share a mentality common in China: rules are meant to be bent, if not resisted.

The Other Digital China: Nonconfrontational Activism on the Social Web

Professor Jing Wang, S. C. Fang Professor of Chinese Language and Culture, recently passed away at the age of 71.

She was the founder and director of MIT New Media Action Lab and served as the Chair of the International Advisory Board for Creative Commons China. Wang is a recipient of the Overseas Distinguished Professor Award, given by China's Ministry of Education.

She was also the founder and secretary-general of NGO2.0, a grassroots nonprofit organization based in Beijing and Shenzhen, specializing in ICT (Information Communication Technology) powered activism. Ford Foundation awarded her a twelve-year grant (2009-2021) to develop NGO2.0. Wang’s first book The Story of Stone (published in English and Japanese) won her the 1992 Joseph Levenson Prize for the “Best Book on Pre-Modern China,” awarded by the Association of Asian Studies.

Her third single-authored book Brand New China: Advertising, Media, and Commercial Culture came out in Arabic, Japanese, and Chinese translations. Her fourth single-authored book The Other Digital China: Nonconfrontational Activism on the Social Web was published by Harvard University Press in December 2019. One of Wang’s edited volumes (with Winnie Wong) “Reconsidering the 2006 MIT Visualizing Cultures Controversy” won the Council of Editors of Learned Journal's “Best Special Issue Award” in 2015. Professor Wang is currently working with a colleague in China to edit a volume on entertainment media and the future of content.

Wang received fellowships from the Radcliffe Institute of Advanced Studies of Harvard University, the National Humanities Center, and the Chiang Ching-kuo Foundation. Wang’s most recent research interests included entertainment media in China and the US, advertising and marketing, civic media and communication, social media action research, and nonprofit technology, with an area focus on the People’s Republic of China.