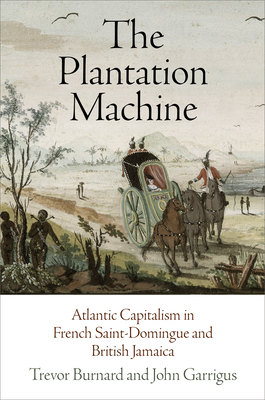 Jamaica and Saint-Domingue were especially brutal but conspicuously successful eighteenth-century slave societies and imperial colonies. These plantation regimes were, to adopt a metaphor of the era, complex machines, finely tuned over time by planters, merchants, and officials to become more efficient at exploiting their enslaved workers and serving their empires. Using a wide range of archival evidence, The Plantation Machine traces a critical half-century in the development of the social, economic, and political frameworks that made these societies possible. Trevor Burnard and John Garrigus find deep and unexpected similarities in these two prize colonies of empires that fought each other throughout the period. Jamaica and Saint-Domingue experienced, at nearly the same moment, a bitter feud between planters and governors, a violent conflict between masters and enslaved workers, a fateful tightening of racial laws, a steady expansion of the slave trade, and metropolitan criticism of planters' cruelty.

The core of The Plantation Machine addresses the Seven Years' War and its aftermath. The events of that period, notably a slave poisoning scare in Saint-Domingue and a near-simultaneous slave revolt in Jamaica, cemented white dominance in both colonies. Burnard and Garrigus argue that local political concerns, not emerging racial ideologies, explain the rise of distinctive forms of racism in these two societies. The American Revolution provided another imperial crisis for the beneficiaries of the plantation machine, but by the 1780s whites in each place were prospering as never before--and blacks were suffering in new and disturbing ways. The result was that Jamaica and Saint-Domingue became vitally important parts of the late eighteenth-century American empires of Britain and France.