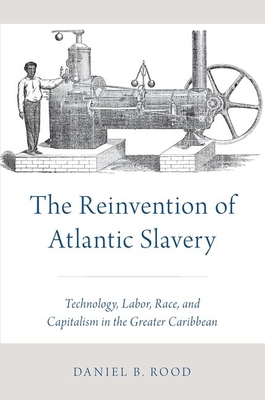 The Reinvention of Atlantic Slavery: Technology, Labor, Race, and Capitalism in the Greater Caribbean

The period of the second slavery was marked by geographic expansion of zones of slavery into the Upper US South, Cuba, and Brazil and chronological expansion into the industrial age.As The Reinvention of Atlantic Slavery shows, ambitious planters throughout the Greater Caribbean hired a transnational group of chemists, engineers, and other plantation experts to assist them in adapting industrial technologies to suit their tropical needs and increase profitability. Not only were technologies reinvented so as to keep manufacturing processes local but slaveholders' adaptation of new racial ideologies also shaped their particular usage of new machines. Finally, these businessmen forged a new set of relationships with one another in order to sidestep the financial dominance of Great Britain and the northeastern United States.

In addition to promoting new forms of mechanization, the technical experts depended on the know-how of slaves alongside whom they worked. Bondspeople with industrial craft skills played key roles in the development of new production processes and technologies like sugar mills. While the very existence of such skilled slaves contradicted prevailing racial ideologies and allowed black people to wield power in their own interest, their contributions grew the slave economies of Cuba, Brazil, and the Upper South. Together reform-minded planters, technical experts, and enslaved people modernized sugar plantations in Louisiana and Cuba; brought together rural Virginia wheat planters and industrial flour-millers in Richmond with the coffee-planting system of southeastern Brazil; and enabled engineers and iron-makers in Virginia to collaborate with railroad and sugar entrepreneurs in Cuba.

Through his examination of the creation of these industrial bodies of knowledge, Daniel B. Rood demonstrates the deepening dependence of the Atlantic economy on forced labor after a few revolutionary decades in which it seemed the institution of slavery might be destroyed. The reinvention of this plantation world in the 1840s and 1850s brought a renewed movement in the 1860s, especially from enslaved people themselves in the United States and Cuba, to end chattel slavery.

This account of capitalism, technology, and slavery offers new perspectives on the nineteenth-century Americas.

The Reinvention of Atlantic Slavery: Technology, Labor, Race, and Capitalism in the Greater Caribbean

Dan Rood specializes in the history of Atlantic slavery and its intersections with the histories of technology, agriculture, and capitalism.  He teaches the pre-1865 half of the US introductory survey, as well as upper division courses in the Atlantic World and the US Civil War.

He also co-directs "Dirty History: An Interdisciplinary Workshop in Agriculture, Environment, and Capitalism," which convenes monthly at UGA (www.dirty-history.org).