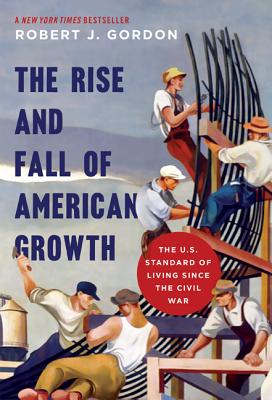 The Rise and Fall of American Growth: The U.S. Standard of Living Since the Civil War

In the century after the Civil War, an economic revolution improved the American standard of living in ways previously unimaginable. Electric lighting, indoor plumbing, motor vehicles, air travel, and television transformed households and workplaces. But has that era of unprecedented growth come to an end? Weaving together a vivid narrative, historical anecdotes, and economic analysis, The Rise and Fall of American Growth challenges the view that economic growth will continue unabated, and demonstrates that the life-altering scale of innovations between 1870 and 1970 cannot be repeated. Gordon contends that the nation's productivity growth will be further held back by the headwinds of rising inequality, stagnating education, an aging population, and the rising debt of college students and the federal government, and that we must find new solutions. A critical voice in the most pressing debates of our time, The Rise and Fall of American Growth is at once a tribute to a century of radical change and a harbinger of tougher times to come.
The Rise and Fall of American Growth: The U.S. Standard of Living Since the Civil War

Robert Gordon is a macroeconomist with a particular interest in unemployment, inflation, and both the long-run and cyclical aspects of labor productivity. He is the author of a textbook in intermediate macroeconomics, now in its 12th edition, and has completed a new book, The Rise and Fall of American Growth, published by the Princeton University Press in January, 2016. He is a Fellow of the Econometric Society and the American Academy of Arts and Sciences.

In 2014 he was elected as a Distinguished Fellow of the American Economic Association.  In 2016 he was named by Bloomberg as one of the 50 most influential people in the world.  For more than three decades, he has been a member of the National Bureau of Economic Research's Business Cycle Dating Committee, which determines the start and end dates for recessions in the United States.