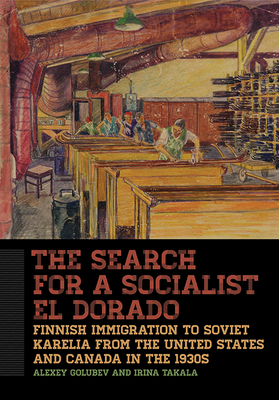 The Search for a Socialist El Dorado: Finnish Immigration to Soviet Karelia from the United States and Canada in the 1930s

In the 1930s, thousands of Finns emigrated from their communities in the United States and Canada to Soviet Karelia, a region in the Soviet Union where Finnish Communist �migr�s were building a society to implement their ideals of socialist Finland. To their new socialist home, these immigrants brought critically needed skills, tools, machines, and money. Educated and skilled, American and Canadian Finns were regarded by Soviet authorities as agents of revolutionary transformations who would not only modernize the economy of Soviet Karelia, but also enlighten its society. North American immigrants, indeed, became active participants of socialist colonization of what Bolshevik leaders perceived as dark, uneducated and backward Soviet ethnic periphery. The Search for a Socialist El Dorado is the first comprehensive account in English of this fascinating story. Using a vast body of documentary sources from archives in Petrozavodsk and Moscow, Russian- and Finnish-language press and literature from the 1930s, oral history interviews and secondary literature, Alexey Golubev and Irina Takala explore in depth the Karelian fever among Finnish Americans and Canadians, and the lives of immigrants in the Soviet Union, their contribution to Soviet economy and culture, and their fates in the Great Terror.
The Search for a Socialist El Dorado: Finnish Immigration to Soviet Karelia from the United States and Canada in the 1930s

Alexey Golubev is a scholar of Russian history with a focus on social and cultural history of the twentieth century and an additional expertise in STS, public and digital history. He completed his Ph.D. in history at the University of British Columbia in 2016 and spent a year as a Banting Postdoctoral Scholar at the University of Toronto before joining the UH Department of History in fall 2017.

During the academic year 2020-21, he serves as the Joy Foundation Fellow at the Radcliffe Institute for Advanced Study, Harvard University, where he is working on a project on science communication in socialist and post-socialist societies. Dr. Golubev has previously taught at Petrozavodsk University in Russia and was a visiting lecturer at the University of Eastern Finland, the University of British Columbia, and the University of Freiburg in Germany.

His research has been supported by the Social Sciences and Humanities Research Council of Canada, Killam Trusts, Gerda Henkel Stiftung, German Historical Institute in Moscow, and the Russian Foundation for Humanities.