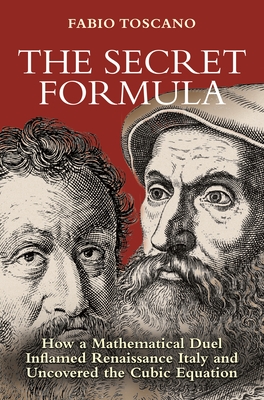 The Secret Formula: How a Mathematical Duel Inflamed Renaissance Italy and Uncovered the Cubic Equation

The Secret Formula tells the story of two Renaissance mathematicians whose jealousies, intrigues, and contentious debates led to the discovery of a formula for the solution of the cubic equation. Niccol� Tartaglia was a talented and ambitious teacher who possessed a secret formula--the key to unlocking a seemingly unsolvable, two-thousand-year-old mathematical problem. He wrote it down in the form of a poem to prevent other mathematicians from stealing it. Gerolamo Cardano was a physician, gifted scholar, and notorious gambler who would not hesitate to use flattery and even trickery to learn Tartaglia's secret.

Set against the backdrop of sixteenth-century Italy, The Secret Formula provides new and compelling insights into the peculiarities of Renaissance mathematics while bringing a turbulent and culturally vibrant age to life. It was an era when mathematicians challenged each other in intellectual duels held outdoors before enthusiastic crowds. Success not only enhanced the winner's reputation, but could result in prize money and professional acclaim. After hearing of Tartaglia's spectacular victory in one such contest in Venice, Cardano invited him to Milan, determined to obtain his secret by whatever means necessary. Cardano's intrigues paid off. In 1545, he was the first to publish a general solution of the cubic equation. Tartaglia, eager to take his revenge by establishing his superiority as the most brilliant mathematician of the age, challenged Cardano to the ultimate mathematical duel.

A lively and compelling account of genius, betrayal, and all-too-human failings, The Secret Formula reveals the epic rivalry behind one of the fundamental ideas of modern algebra.

The Secret Formula: How a Mathematical Duel Inflamed Renaissance Italy and Uncovered the Cubic Equation