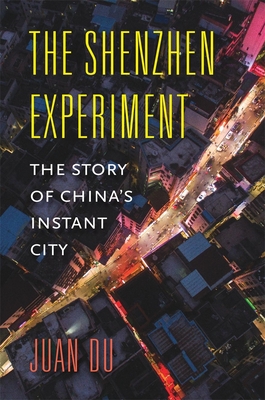 The Shenzhen Experiment: The Story of China's Instant City

An award-winning Hong Kong-based architect with decades of experience designing buildings and planning cities in the People's Republic of China takes us to the Pearl River delta and into the heart of China's iconic Special Economic Zone, Shenzhen.

Shenzhen is ground zero for the economic transformation China has seen in recent decades. In 1979, driven by China's widespread poverty, Deng Xiaoping supported a bold proposal to experiment with economic policies in a rural borderland next to Hong Kong. The site was designated as the City of Shenzhen and soon after became China's first Special Economic Zone (SEZ). Four decades later, Shenzhen is a megacity of twenty million, an internationally recognized digital technology hub, and the world's most successful economic zone. Some see it as a modern miracle city that seemingly came from nowhere, attributing its success solely to centralized planning and Shenzhen's proximity to Hong Kong. The Chinese government has built hundreds of new towns using the Shenzhen model, yet none has come close to replicating the city's level of economic success.

But is it true that Shenzhen has no meaningful history? That the city was planned on a tabula rasa? That the region's rural past has had no significant impact on the urban present? Juan Du unravels the myth of Shenzhen and shows us how this world-famous instant city has a surprising history--filled with oyster fishermen, villages that remain encased within city blocks, a secret informal housing system--and how it has been catapulted to success as much by the ingenuity of its original farmers as by Beijing's policy makers. The Shenzhen Experiment is an important story for all rapidly urbanizing and industrializing nations around the world seeking to replicate China's economic success in the twenty-first century.

The Shenzhen Experiment: The Story of China's Instant City

uan Du is Dean of the Daniels Faculty of Architecture, Landscape, and Design at the University of Toronto. She is also Honorary Professor at The University of Hong Kong and founding director of the Faculty of Architecture’s Urban Ecologies Design Lab (UEDL). She will continue her engagement with Hong Kong through collaborations with HKU as well as continued long-term social services and housing projects in the city.

Juan Du has previously taught at The University of Hong Kong and Massachusetts Institute of Technology. She holds a Doctorate from ETH Zürich and MArch from Princeton University and is the recipient of a US Fulbright Fellowship for research on contemporary Chinese urbanization and architecture. She has previously taught and practised in the US, Europe, and China, and founded her Hong Kong-based office IDU_architecture in 2006.

Through research and design projects, she regularly collaborates with various community stakeholders to understand and improve the urban and architectural qualities of housing conditions and informal communities.

Her works have been featured by wide-ranging media such as The New York Times, The Wall Street Journal, Foreign Affairs, Nature, Architectural Record, ICON, Domus, and Journal of Architectural Education. Her latest book The Shenzhen Experiment – The Story of China’s Instant City published by Harvard University Press, is recipient of the 2020 Book of the Year Award for Interdisciplinary Research by ASU’s Institute for Humanities Research.

Juan Du’s research and writings have been published in Asia, Europe and the United States, including The Architectural Review, Volume, Domus, Journal of Architectural Education, e-flux, Time+Architecture, Urban Flux and Urban China. Her book The Shenzhen Experiment: The Story of China’s Instant City was recently published by Harvard University Press.

Juan is a recognized scholar on China’s rapid urbanization, and her works have been featured by international journals and media such as The New York Times, The Wall Street Journal, Financial Times, Foreign Affairs, CNN, Wired, and Nature.

Juan Du’s current research and design focus is on the relationships between urban planning and informal development within rapid urbanization, specifically on the ‘urban villages’ of Shenzhen, and the ‘subdivided units’ of Hong Kong. Through research and design projects, she regularly collaborates with various stakeholders within the urbanization process of China Mainland and Hong Kong, including governmental institutions, community organizations, NGOs, and individual residents.

Juan Du has practised extensively in the US, Europe, as well as China, and founded her Hong Kong-based office IDU_architecture in 2006, with projects ranging from the extent of built forms to the social and ecological processes of the city.  Her works have been exhibited internationally including multiple presentations at the Venice Architecture Biennale and the Shenzhen Hong Kong Bi-City Biennale of Urbanism\ Architecture.

Source: The University of Hong Kong Faculty of Architecture