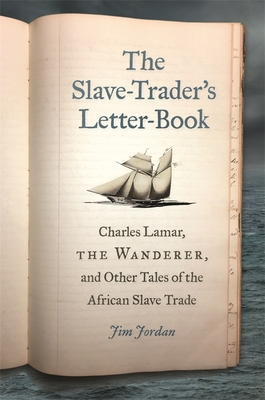 The Slave-Trader's Letter-Book: Charles Lamar, the Wanderer, and Other Tales of the African Slave Trade

In 1858 Savannah businessman Charles Lamar, in violation of U.S. law, organized the shipment of hundreds of Africans on the luxury yacht Wanderer to Jekyll Island, Georgia. The four hundred survivors of the Middle Passage were sold into bondage. This was the first successful documented slave landing in the United States in about four decades and shocked a nation already on the path to civil war.

In 1886 the North American Review published excerpts from thirty of Lamar's letters from the 1850s, reportedly taken from his letter book, which describe his criminal activities. However, the authenticity of the letters was in doubt until very recently. In 2009, researcher Jim Jordan found a cache of private papers belonging to Charles Lamar's father, stored for decades in an attic in New Jersey. Among the documents was Charles Lamar's letter book, confirming him as the author. The Lamar documents, including the Slave-Trader's Letter Book, are now at the Georgia Historical Society and are available for research. This book has two parts. The first recounts the flamboyant and reckless life of Lamar himself, including Lamar's involvement in southern secession, the slave trade, and a plot to overthrow the government of Cuba. A portrait emerges at odds with Lamar's previous image as a savvy entrepreneur and principled rebel. Instead, we see a man who was often broke and whose volatility sabotaged him at every turn. His involvement in the slave trade was driven more by financial desperation than southern defiance. The second part presents the Slave-Trader's Letter-Book. Together with annotations, these seventy long-lost letters shed light on the lead-up to the Civil War from the remarkable perspective of a troubled, and troubling, figure.
The Slave-Trader's Letter-Book: Charles Lamar, the Wanderer, and Other Tales of the African Slave Trade