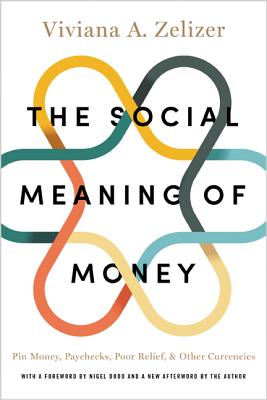 The Social Meaning of Money: Pin Money, Paychecks, Poor Relief, and Other Currencies

A dollar is a dollar--or so most of us believe. Indeed, it is part of the ideology of our time that money is a single, impersonal instrument that impoverishes social life by reducing relations to cold, hard cash. After all, it's just money. Or is it? Distinguished social scientist and prize-winning author Viviana Zelizer argues against this conventional wisdom. She shows how people have invented their own forms of currency, earmarking money in ways that baffle market theorists, incorporating funds into webs of friendship and family relations, and otherwise varying the process by which spending and saving takes place. Zelizer concentrates on domestic transactions, bestowals of gifts and charitable donations in order to show how individuals, families, governments, and businesses have all prescribed social meaning to money in ways previously unimagined.

The Social Meaning of Money: Pin Money, Paychecks, Poor Relief, and Other Currencies

Viviana A. Zelizer is Lloyd Cotsen ‘50 Professor of Sociology at Princeton University. She has published books on the development of life insurance, the changing value of children, the place of money in social life and the economics of intimacy. She has also studied topics ranging from economic ethics to consumption practices.

Source: Princeton University - The Program in Law and Public Affairs