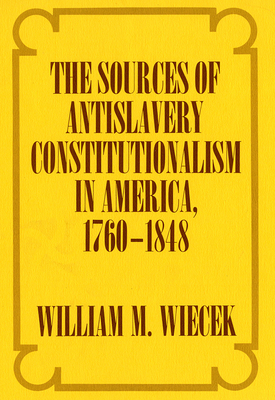 The Sources of Anti-Slavery Constitutionalism in America, 1760-1848

This ambitious book examines the constitutional and legal doctrines of the antislavery movement from the eve of the American Revolution to the Wilmot Proviso and the 1848 national elections. Relating political activity to constitutional thought, William M. Wiecek surveys the antislavery societies, the ideas of their individual members, and the actions of those opposed to slavery and its expansion into the territories. He shows that the idea of constitutionalism has popular origins and was not the exclusive creation of a caste of lawyers. In offering a sophisticated examination of both sides of the argument about slavery, he not only discusses court cases and statutes, but also considers a broad range of extrajudicial thought--political speeches and pamphlets, legislative debates and arguments.

The Sources of Anti-Slavery Constitutionalism in America, 1760-1848

Professor Wiecek practiced law in New Hampshire and taught legal and constitutional history at the University of Missouri-Columbia for 16 years before coming to Syracuse. He has written or edited seven books, as well as numerous articles and chapters, on slavery and its abolition, republicanism, nineteenth-century constitutional development, nuclear power, and the United States Supreme Court.

Professor Wiecek has written a history of the United States Supreme Court from 1941 to 1953, covering the chief-justiceships of Harlan Fiske Stone and Fred Vinson, for the Holmes Devise History of the Supreme Court of the United States. He has taught courses in legal and constitutional history, constitutional law, property, race and law, corporations, civil procedure, and Roman law. He holds a joint appointment as Professor of History in the Maxwell School of Syracuse University. Professor Wiecek received the University Scholar/Teacher of the Year Award in 1997 and in 2001 the Chancellor’s Citation for Exceptional Academic Achievement, the university’s highest academic award.

Professor Wiecek earned a B.A. from Catholic University, a LL.B. from Harvard University and a Ph.D. from the University of Wisconsin at Madison.