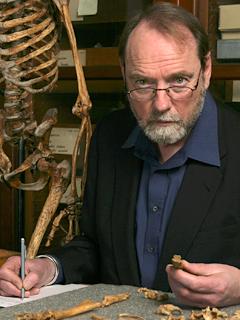 The Strange Case of the Rickety Cossack: and Other Cautionary Tales from Human Evolution

Ian Tattersall is currently curator emeritus in the Division of Anthropology of the American Museum of Natural History in New York City. He has carried out both primatological and paleontological fieldwork in countries as diverse as Madagascar, Vietnam, Surinam, Yemen, and Mauritius. Trained in archaeology and anthropology at the University of Cambridge, and in geology and vertebrate paleontology at Yale University, Ian has concentrated his research since the 1960s in three main areas: the analysis of the human fossil record and its integration with evolutionary theory, the origin of human cognition, and the study of the ecology and systematics of the lemurs of Madagascar.

Ian is also a prominent interpreter of human paleontology to the public, with numerous trade books to his credit, as well as several articles in Scientific American and the co-editorship of the definitive Encyclopedia of Human Evolution and Prehistory. He lectures widely at venues around the world, and, as curator, has also been responsible for several major exhibits at the American Museum of Natural History, including Ancestors: Four Million Years of Humanity (1984); Dark Caves, Bright Visions: Life In Ice Age Europe (1986); Madagascar: Island of the Ancestors (1989); The First Europeans: Treasures from the Hills of Atapuerca (2003); the highly acclaimed Hall of Human Biology and Evolution (1993); and the successor Hall of Human Origins (2007).

In this brief but nuanced history of his field, paleoanthropologist Ian Tattersall describes the causes of many of the misconceptions of the exploration of our own origins. Often contrary and illuminating, Tattersall looks at how paleoanthropologists think and work and delves into several intellectual challenges faced by fellow scientists. He goes beyond the book’s anecdotal title to highlight the importance of being objective and examining evidence rather than relying on the subjective opinion of well-established experts.

Tattersall reviews controversial hypotheses along with eminent figures who have shaped our understanding of how we have emerged and evolved.