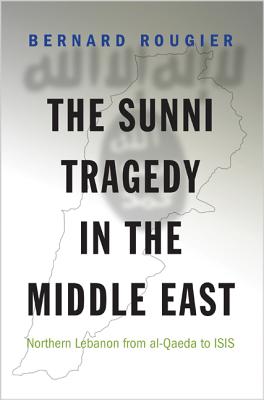 The Sunni Tragedy in the Middle East: Northern Lebanon from Al-Qaeda to Isis

Northern Lebanon is a land in turmoil. Long under the sway of the Assad regime in Syria, it is now a magnet for Sunni Muslim jihadists inspired by anti-Western and anti-Shi'a worldviews. The Sunni Tragedy in the Middle East describes in harrowing detail the struggle led by an active minority of jihadist militants, some claiming allegiance to ISIS, to seize control of Islam and impose its rule over the region's Sunni Arab population. Bernard Rougier introduces us to men with links to the mujahidin in Afghanistan, the Sunni resistance in Iraq, al-Qaeda, and ISIS. He describes how they aspire to replace North Lebanon's Sunni elites, who have been attacked and discredited by neighboring powers and jihadists alike, and explains how they have successfully positioned themselves as the local Sunni population's most credible defender against powerful external enemies--such as Iran and the Shi'a militia group Hezbollah. He sheds new light on the methods and actions of the jihadists, their internal debates, and their evolving political agenda over the past decade. This riveting book is based on more than a decade of research, more than one hundred in-depth interviews with players at all levels, and Rougier's extraordinary access to original source material. Written by one of the world's leading experts on jihadism, The Sunni Tragedy in the Middle East provides timely insight into the social, political, and religious life of this dangerous and strategically critical region of the Middle East.
The Sunni Tragedy in the Middle East: Northern Lebanon from Al-Qaeda to Isis

Bernard Rougier is a specialist in Middle Eastern Studies. He has been Assistant Professor of Political Science at Clermont-Ferrand University, Sciences Po, Paris and Saint Joseph University, Beirut. He is the author of Everyday Jihad: the Rise of Radical Islam among Palestinians in Lebanon (Harvard University Press, 2007) and L’Oumma en fragments (Presses Universitaires de France, 2011). He is currently Director of the Cairo-based Centre d’Études et de Documentation Economiques, Juridiques et Sociales.