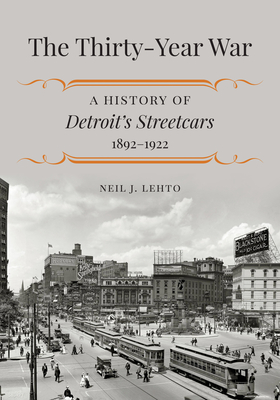 Streetcars played an especially important role in society around the turn of the twentieth century in Detroit, in part because of the downtown hub-and-spoke design of its main streets. During this period the streetcar was the main mode of transportation for the average citizen, as horse-drawn carriages and automobiles were not found outside of the upper class. Control over streetcar franchises was highly coveted--this control was simultaneous with having power over how and where people were transported throughout the city, making it an incredible political tool. The Thirty-Year War was a battle waged between 1892 and 1922 by the City of Detroit against the politically powerful and deeply entrenched corporations that owned streetcar franchises for control of the city's streetway system. This compelling history shows how and why the owners of monopoly franchises of great public utilities such as bridges, street railways, electricity, natural gas, and cable television will protect and defend their privilege against public ownership or control, and is an example of how one city successfully fought back.
The Thirty-Year War: A History of Detroit's Streetcars, 1892-1922

Neil J. Lehto is a 65-year-old attorney who lives in Berkley, Michigan. He and with his wife, Cheri, have seven daughters.  So far, they have seven grandsons, Andrew, Joseph, Ayden, Austin, Max, Ethan,and Oscar, and a two granddaughters, Hannah and
Samantha.

Lehto began writing as a part-time newsroom assistant at The Daily Tribune in Royal Oak, Michigan,  in 1968, while he attended Wayne State University. In 1972, he began working fulling time as a reporter upon his return from training as a mechanized
infantry scout with the Ist. Battalion of the 225th Mechanized Infantry Division of the Michigan Army National Guard stationed in Detroit, where he served as Battalion Public Information Officer. After graduating from Wayne State University in 1974 with a
bachelor of arts in journalism he enrolled at the Detroit College of Law.

He also graduated from the Michigan Military Academy in Battle Creek in 1974 with a commission as second lieutenant and returned to service as a platoon leader with Company C of the 225th. Neil was honorably discharged in 1976. He served as a
managing editor of the Detroit College of Law Review in 1976 and 1978. He graduated in 1978 and joined a law firm in Sterling Heights, Michigan, where he eventually became a shareholder. He left the firm in 2003 to establish a solo practice representing cities, villages and townships in cable television, telecommunications, public utility, right-of-way management and related matters. He remains actively practicing law part-time today.