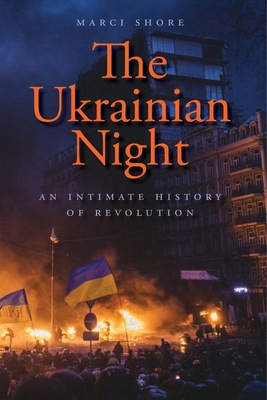 The Ukrainian Night: An Intimate History of Revolution

A vivid and intimate account of the Ukrainian Revolution, the rare moment when the political became the existential

What is worth dying for? While the world watched the uprising on the Maidan as an episode in geopolitics, those in Ukraine during the extraordinary winter of 2013-14 lived the revolution as an existential transformation: the blurring of night and day, the loss of a sense of time, the sudden disappearance of fear, the imperative to make choices.

In this lyrical and intimate book, Marci Shore evokes the human face of the Ukrainian Revolution. Grounded in the true stories of activists and soldiers, parents and children, Shore's book blends a narrative of suspenseful choices with a historian's reflections on what revolution is and what it means. She gently sets her portraits of individual revolutionaries against the past as they understand it--and the future as they hope to make it. In so doing, she provides a lesson about human solidarity in a world, our world, where the boundary between reality and fiction is ever more effaced.

The Ukrainian Night: An Intimate History of Revolution

She is the translator of Micha? G?owi?ski’s The Black Seasons and the author of Caviar and Ashes: A Warsaw Generation’s Life and Death in Marxism, 1918-1968, The Taste of Ashes: The Afterlife of Totalitarianism in Eastern Europe, and The Ukrainian Night: An Intimate History of Revolution. In 2018 she received a Guggenheim Fellowship for her current book project, a history of phenomenology in East-Central Europe, tentatively titled “Eyeglasses Floating in Space: Central European Encounters That Came about While Searching for Truth.”

She is a regular visiting fellow at the Institut für die Wissenschaften vom Menschen in Vienna. Presently she is co-curating a Public Seminar/Eurozine forum “On the Uses and Disadvantages of Historical Comparisons for Life” (title stolen from Nietzsche): https://publicseminar.org/essays/the-last-time-i-saw-them-new-democracy-seminar-forum/

Her articles and essays include