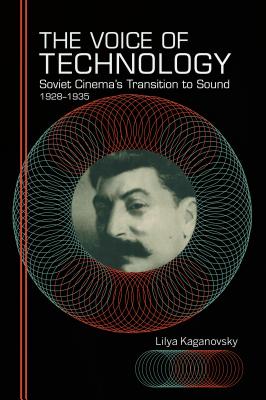 The Voice of Technology: Soviet Cinema's Transition to Sound, 1928-1935

As cinema industries around the globe adjusted to the introduction of synch-sound technology, the Soviet Union was also shifting culturally, politically, and ideologically from the heterogeneous film industry of the 1920s to the centralized industry of the 1930s, and from the avant-garde to Socialist Realism. In The Voice of Technology: Soviet Cinema's Transition to Sound, 1928-1935, Lilya Kaganovsky explores the history, practice, technology, ideology, aesthetics, and politics of the transition to sound within the context of larger issues in Soviet media history. Industrialization and centralization of the cinema industry greatly altered the way movies in the Soviet Union were made, while the introduction of sound radically altered the way these movies were received. Kaganovsky argues that the coming of sound changed the Soviet cinema industry by making audible, for the first time, the voice of State power, directly addressing the Soviet viewer. By exploring numerous examples of films from this transitional period, Kaganovsky demonstrates the importance of the new technology of sound in producing and imposing the Soviet Voice.

The Voice of Technology: Soviet Cinema's Transition to Sound, 1928-1935

Lilya Kaganovsky is the Richard and Margaret Romano Professor of Slavic, Comparative Literature, and Media & Cinema Studies, at the University of Illinois, Urbana-Champaign. Kaganovsky received her B.A. in Literature from U.C. Santa Cruz in 1992, with a specialization in English, American, and Russian Literature.

She received her M.A. in Slavic Languages and Literatures from Columbia University in 1994; and her Ph.D. in Comparative Literature with an Emphasis in Film Studies from U.C. Berkeley in 2000.

She has been at the University of Illinois since 2001, where she is affiliated with the Unit for Criticism & Interpretive Theory, the College of Media, the Department of Gender and Women's Studies, and the Program in Jewish Culture and Society, and the Initiative in Holocaust, Genocide, and Memory Studies.