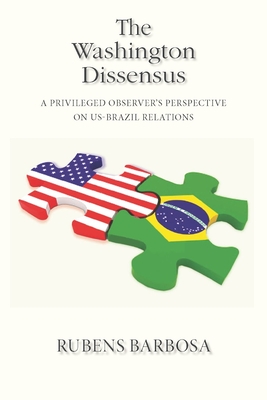 The Washington Dissensus: A Privileged Observer's Perspective on US-Brazil Relations

During the five years that he represented Brazil in the United States (under both the Cardoso and Lula presidencies), Ambassador Barbosa witnessed presidential elections that brought opposition parties to power in both the United States and Brazil, the 9/11 terrorist attacks, the outbreak of war in Afghanistan and Iraq, and the election of Luiz Inacio Lula da Silva. In this memoir, translated from the Portuguese, Barbosa recounts the most significant regional and global issues that arose, alongside the domestic political conflicts within a divided North American society. Barbosa provides sophisticated analysis of economic relations during these changing times, and also explores the many US misconceptions about Brazil and the Latin American region. From the privileged post of observation that an ambassadorship in the American capital represents, Barbosa had the exceptional opportunity over a considerable length of time to closely follow relations between Brazil and the United States. He witnessed relations evolve under two governments as they developed distinct foreign policies, which at times led to a breakdown in understanding between the two countries.
The Washington Dissensus: A Privileged Observer's Perspective on US-Brazil Relations

Ambassador Barbosa has held a variety of senior positions in the Brazilian Government's Ministry of Foreign Relations, including as Secretary for International Affairs at the Ministry of Finance; Brazilian Permanent Representative to the Latin American Integration Association (ALADI); Under Secretary-General for Regional Integration, Trade and Economic Affairs in the Ministry of Foreign Relations; and as Coordinator of the Brazilian Section of Mercosur, the Southern Cone Common Market.

A highly experienced diplomat, especially in economic, trade and commercial affairs, he actively participated in decision-making processes in these areas, headed hundreds of negotiation missions and was the Chairman of the Association of Coffee-Producing Countries for five years.

Ambassador Barbosa regulary writes articles and essays for the press and specialized magazines and is also the author of four books: "Integração Econômica da América Latina: da retórica à realidade" (Economic Integration of Latin America: from rhetoric to the reality), "Panorama Visto de Londres" (A Broad View from London), which deals with foreign and economic policies, "The Mercosur Codes", published by the British Institute of International and Comparative Law, and his most recent book “Mercosul Quinze Anos” (Mercosur Fifteen Years), which evaluates the organization fifteen years after its creation, .

He was also editor and organizer of "O Brasil dos Brasilianistas" (The Brazil of the Brazilianists) Mercosur and the Regional Integration, and The Dissent in Washington (2012). Ambassador Barbosa has a Master's degree from the London School of Economics and Political Science (1971).

The Ambassador currently works as a business consultant and occupies, among others, the positions of President of the Upper Council of Foreign Trade from FIESP (Federation of Industries of the State of Sao Paulo) and member of the business council of The Community of Portuguese Language Countries (CPLP). He is also member of many other councils, such as the Sao Paulo State Symphony Orchestra (OSESP) and the CSU CardSystem S.A Company.

Member of the Group of Analysis of the International Conjuncture of the University of São Paulo, President Emeritus of CEBEU – Brazil – US Business Council and Publisher of the Journal Interesse Nacional.