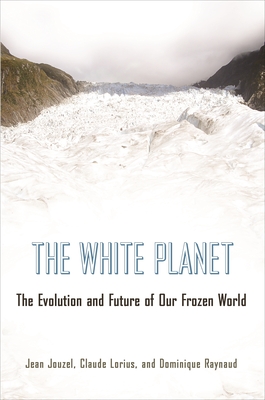 The White Planet: The Evolution and Future of Our Frozen World

A gripping journey through the icy regions of our changing planet

From the Arctic Ocean and ice sheets of Greenland, to the glaciers of the Andes and Himalayas, to the great frozen desert of Antarctica, The White Planet takes readers on a spellbinding scientific journey through the shrinking world of ice and snow to tell the story of the expeditions and discoveries that have transformed our understanding of global climate. Written by three internationally renowned scientists at the center of many breakthroughs in ice core and climate science, this book provides an unparalleled firsthand account of how the white planet affects global climate--and how, in turn, global warming is changing the frozen world.

Jean Jouzel, Claude Lorius, and Dominique Raynaud chronicle the daunting scientific, technical, and human hurdles that they and other scientists have had to overcome in order to unravel the mysteries of past and present climate change, as revealed by the cryosphere--the dynamic frozen regions of our planet. Scientifically impeccable, up-to-date, and accessible, The White Planet brings cutting-edge climate research to general readers through a vivid narrative. This is an essential book for anyone who wants to understand the inextricable link between climate and our planet's icy regions.

The White Planet: The Evolution and Future of Our Frozen World

Jean Jouzel obtained his diploma in Physical Chemistry from École Normale Supérieure de Chimie Industrielle, Lyon, in 1968. In 1974 he was awarded a PhD from the Faculté d’Orsay, Paris, for his work on deuterium and tritium in hailstones, which marked the beginning of his interest in extracting information about Earth system processes and change using water isotopes. Jouzel has been a research scientist at CEA, France’s nuclear energy research center, since 1973 where he served as head of the Geochemistry Laboratory from 1986 to 1991.

Starting in 1992, he was associate director of the newly formed LSCE. From 2001 to 2009 he was Director of the Institut Pierre Simon Laplace, which combine five laboratories in Paris doing climate research. He is currently Senior Scientist at LSCE. He has served as Vice Chair of the IPCC from 2002 to 2008, and was elected to a new term in 2008.

Jouzel has made key scientific contributions that have transformed paleoclimate research: (1) theoretical foundation for understanding how water isotopes encode environmental and climatic information; (2) measurement and interpretation of unique paleoclimatic records, specifically deep ice cores from Greenland and Antarctica; and (3) direct simulation of ice core proxies using sophisticated climate models. Jouzel has authored or co-authored over 260 papers in the professional literature, which have collected more than 20,000 citations.