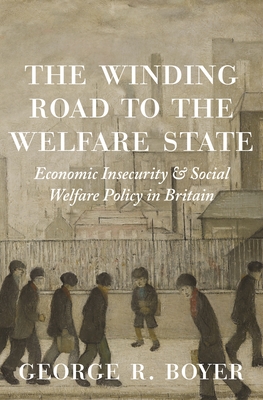 The Winding Road to the Welfare State: Economic Insecurity and Social Welfare Policy in Britain

How did Britain transform itself from a nation of workhouses to one that became a model for the modern welfare state? The Winding Road to the Welfare State investigates the evolution of living standards and welfare policies in Britain from the 1830s to 1950 and provides insights into how British working-class households coped with economic insecurity. George Boyer examines the retrenchment in Victorian poor relief, the Liberal Welfare Reforms, and the beginnings of the postwar welfare state, and he describes how workers altered spending and saving methods based on changing government policies.

From the cutting back of the Poor Law after 1834 to Parliament's abrupt about-face in 1906 with the adoption of the Liberal Welfare Reforms, Boyer offers new explanations for oscillations in Britain's social policies and how these shaped worker well-being. The Poor Law's increasing stinginess led skilled manual workers to adopt self-help strategies, but this was not a feasible option for low-skilled workers, many of whom continued to rely on the Poor Law into old age. In contrast, the Liberal Welfare Reforms were a major watershed, marking the end of seven decades of declining support for the needy. Concluding with the Beveridge Report and Labour's social policies in the late 1940s, Boyer shows how the Liberal Welfare Reforms laid the foundations for a national social safety net.

A sweeping look at economic pressures after the Industrial Revolution, The Winding Road to the Welfare State illustrates how British welfare policy waxed and waned over the course of a century.

The Winding Road to the Welfare State: Economic Insecurity and Social Welfare Policy in Britain

George R. Boyer is the Martin P. Catherwood Professor of Industrial and Labor Relations and Professor in the Departments of Economics and International and Comparative Labor in the ILR School at Cornell University.

He came to Cornell in 1982, after receiving his Ph.D. in Economics at the University of Wisconsin. He is the author of The Winding Road to the Welfare State: Economic Insecurity and Social Welfare Policy in Britain (Princeton University Press, 2018), An Economic History of the English Poor Law, 1750-1850 (Cambridge University Press, 1990), and of numerous articles in the field of economic history. He currently is the Senior Associate Dean for Academic Affairs in ILR.

Professor Boyer's current research examines various aspects of British labor markets from the late eighteenth century to 1950, including trends in working class living standards, the beginnings of the gig economy, the economics of public poor relief and private charity, and unemployment and underemployment.

Professor Boyer's teaching includes undergraduate courses on the Development of Economic Thought and Institutions, the Evolution of Social Policy in Britain and America, and Twentieth Century Economic History.