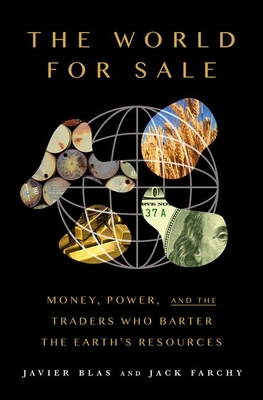 The World for Sale: Money, Power, and the Traders Who Barter the Earth's Resources

The modern world is built on commodities - from the oil that fuels our cars to the metals that power our smartphones.

We rarely stop to consider where they have come from. But we should.

In The World for Sale, two leading journalists lift the lid on one of the least scrutinised corners of the world economy: the workings of the billionaire commodity traders who buy, hoard and sell the earth's resources.

It is the story of how a handful of swashbuckling businessmen became indispensable cogs in global markets: enabling an enormous expansion in international trade, and connecting resource-rich countries - no matter how corrupt or war-torn - with the world's financial centres.

And it is the story of how some traders acquired untold political power, right under the noses of western regulators and politicians - helping Saddam Hussein to sell his oil, fuelling the Libyan rebel army during the Arab Spring, and funnelling cash to Vladimir Putin's Kremlin in spite of western sanctions.

The result is an eye-opening tour through the wildest frontiers of the global economy, as well as a revelatory guide to how capitalism really works.

The World for Sale: Money, Power, and the Traders Who Barter the Earth's Resources

Javier Blas was appointed Financial Times’ commodities editor in 2010, having joined the newspaper in 2007 as commodities correspondent. He led a team of reporters based in London, Beijing and New York covering oil, metals and agricultural commodities markets, trading houses, and the geopolitics of natural resources.

Previously, he reported on the international economy for the leading Spanish business daily, Expansion. Blas was awarded the A. H. Boerma prize by the UN’s Food and Agriculture Organisation for his coverage of the 2007-08 food crisis.

He was born in Spain and received a BA / MA in journalism from the University of Navarra, Spain, where he specialized in business journalism. He also studied political communication at Sheffield University, United Kingdom.