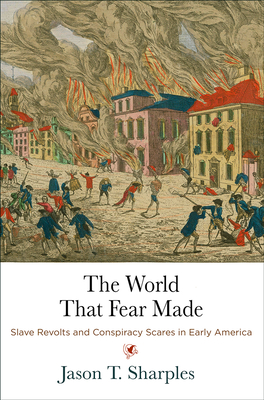 The World That Fear Made: Slave Revolts and Conspiracy Scares in Early America

From the Stono Rebellion in 1739 to the Haitian Revolution of 1791 to Nat Turner's Rebellion in 1831, slave insurrections have been understood as emblematic rejections of enslavement, the most powerful and, perhaps, the only way for slaves to successfully challenge the brutal system they endured. In The World That Fear Made, Jason T. Sharples orients the mirror to those in power who were preoccupied with their exposure to insurrection. Because enslavers in British North America and the Caribbean methodically terrorized slaves and anticipated just vengeance, colonial officials consolidated their regime around the dread of rebellion. As Sharples shows through a comprehensive data set, colonial officials launched investigations into dubious rumors of planned revolts twice as often as actual slave uprisings occurred. In most of these cases, magistrates believed they had discovered plans for insurrection, coordinated by a network of enslaved men, just in time to avert the uprising. Their crackdowns, known as conspiracy scares, could last for weeks and involve hundreds of suspects. They sometimes brought the execution or banishment of dozens of slaves at a time, and loss and heartbreak many times over.

Mining archival records, Sharples shows how colonists from New York to Barbados tortured slaves to solicit confessions of baroque plots that were strikingly consistent across places and periods. Informants claimed that conspirators took direction from foreign agents; timed alleged rebellions for a holiday such as Easter; planned to set fires that would make it easier to ambush white people in the confusion; and coordinated the uprising with European or Native American invasion forces. Yet, as Sharples demonstrates, these scripted accounts rarely resembled what enslaved rebels actually did when they took up arms. Ultimately, he argues, conspiracy scares locked colonists and slaves into a cycle of terror that bound American society together through shared racial fear.

The World That Fear Made: Slave Revolts and Conspiracy Scares in Early America

Dr. Sharples teaches early American history and world civilizations. He offers courses in early American colonial societies, European empires, and indigenous peoples; slavery and the African diaspora; and the American Revolution and early United States. His students grapple with Early America’s foundational texts through hands-on experience with rare books in the Marvin and Sybil Weiner Collection, the likes of which appeared in the personal libraries of Benjamin Franklin, Thomas Jefferson, and John Adams.

Dr. Sharples writes on the social and cultural history of early North America and the Caribbean based on his archival research in Europe, the Caribbean, and at major research libraries around the United States (CV). He is currently researching racial fears and the policing of black people in Early America. His book manuscript, The World That Fear Made: Conspiracy, Imagination, and Power in Early American Slavery, reveals the inaccurate but powerful assumptions—the fears—that shaped North American and Caribbean colonial societies and which governed webs of relations within slave quarters and between colonial ports. At the center of the book are dozens of governmental investigations into purported "slave conspiracies"—or plans for rebellion that never materialized—from 1670 to 1790.

Hundreds of falsely accused enslaved people were executed or banished as a result of white people acting on racial fears. The World That Fear Made explains how black and white early Americans created those fears, why some people found them believable and how others manipulated them, and how everyone reshaped their societies because of these fears. Dr. Sharples explores these ideas in his recent publication, "Discovering Slave Conspiracies: New Fears of Rebellion and Old Paradigms of Plotting in Seventeenth-Century Barbados," in the American Historical Review.