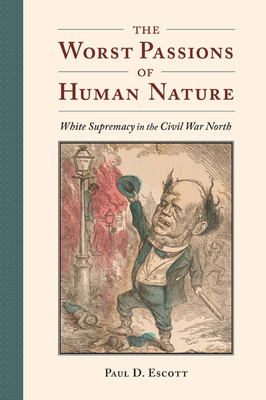 The American North's commitment to preventing a southern secession rooted in slaveholding suggests a society united in its opposition to slavery and racial inequality. The reality, however, was far more complex and troubling. In his latest book, Paul Escott lays bare the contrast between progress on emancipation and the persistence of white supremacy in the Civil War North. Escott analyzes northern politics, as well as the racial attitudes revealed in the era's literature, to expose the nearly ubiquitous racism that flourished in all of American society and culture.

Contradicting much recent scholarship, Escott argues that the North's Democratic Party was consciously and avowedly the white man's party, as an extensive examination of Democratic newspapers, as well as congressional debates and other speeches by Democratic leaders, proves. The Republican Party, meanwhile, defended emancipation as a war measure but did little to attack racism or fight for equal rights. Most Republicans propagated a message that emancipation would not disturb northern race relations or the interests of northern white voters: freed slaves, it was felt, would either leave the nation or remain in the South as subordinate laborers.

Escott's book uncovers the substantial and destructive racism that lay beyond the South's borders. Although emancipation represented enormous progress, racism flourished in the North, and assumptions of white supremacy remained powerful and nearly ubiquitous throughout America.