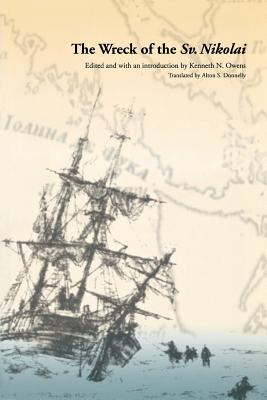 The Wreck of the Sv. Nikolai

In 1808 the Sv. Nikolai, owned by the Russian American Company, set sail from New Arkhangel (modern-day Sitka, Alaska) to explore and identify a site for a permanent Russian fur trading post on the mainland south of Vancouver Island. Heavy seas drove the ship aground in late December, forcing twenty-two crew members ashore, including Anna Petrovna Bulygin, the wife of ship captain Nikolai Isaakovich Bulygin. Over the next several months the shipwrecked crew clashed with Hohs, Quileutes, and Makahs, but with little knowledge of the country, the castaways soon found themselves owing their lives to the very tribes they had fought with upon arrival. The tribes captured and enslaved several of the crew members. In 1810 an American captain sailing for the Russian American Company ransomed the survivors. This volume combines two source accounts of the event. The first is the story of a Russian survivor, Timofei Osipovich Tarakanov, the expedition's leader after the shipwreck. The second is a Quileute account, preserved orally for nearly a century before being recorded in 1909. Combined, these wonderful accounts tell a tale of adventure with moments of high drama, heroism, a touch of comedy, and eventual tragedy.
The Wreck of the Sv. Nikolai