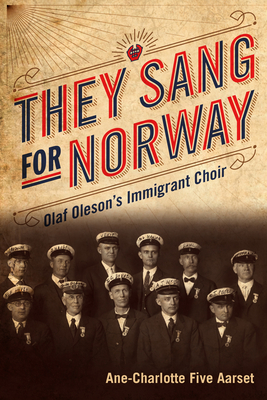 They were brothers from Norway's Red County. One was a guerrilla leader, the other a president of a singing association. One emigrated to America, the other stayed home to fight for Norwegian independence. Both had an impact on their nation's history. This is the story of the one who left.

Olaf Martin Oleson was among the hundreds of thousands of Norwegians who emigrated to the United States during the nineteenth century. With strongly rooted connections to the homeland, Oleson settled in the Midwest and became a successful businessman, philanthropist, and politician. He also helped form influential organizations in his new land, including the Norwegian-American Historical Association and the Norwegian Singers' Association of America. With the choir group, Oleson shared songs of his native Norway throughout North America--while raising money to support the illegal army and new political party forming back home in the fight for liberation from Sweden.

In They Sang for Norway, Ane-Charlotte Five Aarset tells the story of O. M. Oleson--her great-grand-uncle--and his contributions to the politics and culture of two nations. It is an immigrant's tale, an exploration of Norwegian-American life, and the story of music's importance to a community and people.
They Sang for Norway: Olaf Oleson's Immigrant Choir

Ane-Charlotte Five Aarset, born 1947, a Norwegian journalist and author of Utvandreren (The Emigrant), 2012, Kavaleristen (The Cavalryman), 2007, about which Norsk Utvandrermuseum (The Norwegian Emigrant Museum) has created a mobile exhibition, and Skyttergeneralen, (The Marksman General), 2005, which gave her the prize “Freelance Journalist of the Year”.