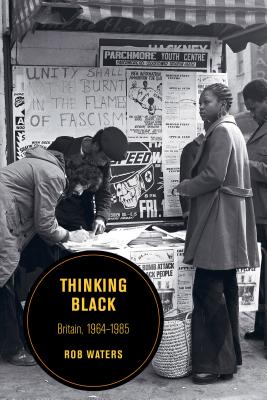 It was a common charge among black radicals in the 1960s that Britons needed to start thinking black. As state and society consolidated around a revived politics of whiteness, thinking black, they felt, was necessary for all who sought to build a liberated future out of Britain's imperial past.

In Thinking Black, Rob Waters reveals black radical Britain's wide cultural-political formation, tracing it across new institutions of black civil society and connecting it to decolonization and black liberation across the Atlantic world. He shows how, from the mid-1960s to the mid-1980s, black radicalism defined what it meant to be black and what it meant to be radical in Britain.

I joined the School of History at Queen Mary in September 2019 as a Lecturer in Modern British History, and I will hold a Leverhulme Trust Early Career Fellowship at Queen Mary until the end of December 2019.

My research is concerned with how global race politics and the struggles of decolonization have shaped the modern history of Britain.

My first book, Thinking Black: Britain, 1964–1985 (University of California Press), looked at Black Power as a political and cultural force in Britain. Ideas of blackness mobilized through the rubric of a transnational Black Power were crucial in the conceptualization of what a postcolonial Britain might become, and held a significant place in the development of New Left politics in Britain. In Thinking Black, I chart black radical Britain’s wide cultural-political formation, tracing it across new institutions of black civil society and connecting it to decolonization and black liberation across the Atlantic world. The book shows how, from the mid-1960s to the mid-1980s, black radicalism defined what it meant to be black and what it meant to be radical in Britain. It was shortlisted for the Royal Historical Society's 2020 Whitfield Prize.

My current project, the history of multiculturalism, is funded by a Leverhulme Trust Early Career Fellowship and focuses on the history of multiculturalism in London. I am interested in how, in London’s transition to a mass multiculture in the second half of the twentieth century, integration was posed as a project of uplift, social reform and good citizenship, working through established institutions, practices and understandings of political and social integration developed through imperial liberalism, anti-colonial nation building, and Britain’s transition to a mass democracy. I am interested also in the limited traction that this framing of integration had, and how it stood in a contested relationship with popular cosmopolitanism, anti-racist activism, and forms of racial exclusion and violence. As part of this project, I have created a digital map of black London in the late-twentieth century, charting some of the research: www.blacklondonhistories.org.uk.

I am also interested in history writing as a practice of decolonization, and in memoirs and fiction as forms of historical evidence. In both these contexts, I am interested in the intersections between literary and historical studies.