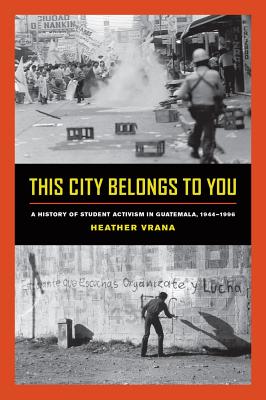 This City Belongs to You: A History of Student Activism in Guatemala, 1944-1996

Between 1944 and 1996, Guatemala experienced a revolution, counterrevolution, and civil war. Playing a pivotal role within these national shifts were students from Guatemala's only public university, the University of San Carlos (USAC). USAC students served in, advised, protested, and were later persecuted by the government, all while crafting a powerful student nationalism. In no other moment in Guatemalan history has the relationship between the university and the state been so mutable, yet so mutually formative. By showing how the very notion of the middle class in Guatemala emerged from these student movements, this book places an often-marginalized region and period at the center of histories of class, protest, and youth movements and provides an entirely new way to think about the role of universities and student bodies in the formation of liberal democracy throughout Latin America.
This City Belongs to You: A History of Student Activism in Guatemala, 1944-1996

Professor Heather Vrana (Ph.D. Indiana University, 2013) is a historian of modern Latin America with an emphasis on Central America, and joined the University of Florida in August 2017 after teaching at Southern Connecticut State University. Vrana is author of This City Belongs to You: A History of Student Activism in Guatemala (University of California Press, 2017) and Anti-colonial Texts from Central American Student Movements 1929-1983 (Edinburgh University Press, 2017), and co-editor with Julie Gibbings of Out of the Shadow: Revisiting the Revolution from Post-Peace Guatemala (University of Texas Press, 2020).

Vrana’s current research project, Disability and the Making of Modern Central America, follows disability, as a concept and in reference to groups of people and bodies, across twentieth-century-Guatemala, El Salvador, and Nicaragua to reveal contradictions in projects of democratic restoration, revolutionary uplift, and technocratic modernism.

This book project emphasizes four themes: interrelated professionalization of medicine and elaboration of disability terminologies; competition over responsibility for care among religious charities, government, and family; development paradigms in public health and social security institutes; and human rights as a framework for addressing harm after the civil wars. Ultimately, this analysis suggests a comprehensive reexamination of Central American state formation.