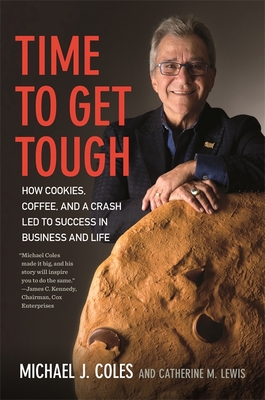 Time to Get Tough: How Cookies, Coffee, and a Crash Led to Success in Business and Life

Michael J. Coles, the cofounder of the Great American Cookie Company and the former CEO of Caribou Coffee, did not follow a conventional path into business. He does not have an Ivy League pedigree or an MBA from a top-ten business school. He grew up poor, starting work at the age of thirteen. He had many false starts and painful defeats, but Coles has a habit of defying expectations. His life and career have been about turning obstacles into opportunities, tragedies into triumphs, and poverty into philanthropy.

In Time to Get Tough, Coles explains how he started a $100-million company with only $8,000, overcame a near-fatal motorcycle accident, ran for the U.S. Congress, and set three transcontinental cycling world records. His story also offers a firsthand perspective on the business, political, and philanthropic climate in the last quarter of the twentieth century and serves as an important case study for anyone interested in overcoming a seemingly insurmountable challenge. Readers will also discover practical leadership lessons and unconventional ways of approaching business.

Time to Get Tough: How Cookies, Coffee, and a Crash Led to Success in Business and Life

After a successful 19-year career in the clothing business, Michael Coles co-founded Great American Cookie Company in 1977 with an investment of only $8,000. Shortly after starting the company, he was involved in a near-fatal motorcycle accident. He was told by doctors he would never walk again unaided. As Coles recovered through a self-designed rehabilitation program, he took the company from its first store in Perimeter Mall in Atlanta to hundreds of stores nationwide. At the same time, he set three coast-to-coast bicycling records.

Coles’ commitment to community service led him to run for public office in 1996 as the democratic nominee for the House of Representatives in the Sixth District of Georgia. In 1998, he won the democratic nomination for U.S. Senate, challenging Senator Paul Coverdell.

In 2003, Coles became chairman, CEO and president of Caribou Coffee. Over the next five years, Coles more than doubled the size of the company, extending the brand reach domestically and abroad. In September 2005, he successfully took the company public on NASDAQ under the symbol CBOU.

Coles went on to join others in founding Charter Bank & Trust and served as its chairman. He took the bank public and sold the publicly traded company to Synovus Bank.

Appointed by Governor Roy Barnes in 1999, Coles served as chair of Georgia Film, Video and Music Advisory Board. During his four years as chairman, Coles and his board successfully passed HB610, which was the first-ever tax incentive of its kind in Georgia. Because of this bill, the film industry began a rebirth. Film grew from $170 million in 1999 to over $1.5 billion in economic impact by 2003. Today, Georgia’s film industry generates over $9.5 billion.

Coles and his wife, Donna, contribute much of their time and resources to educational and philanthropic organizations. In 1995, they were honored as the Georgia Philanthropists of the Year.

In 2001, Governor Barnes appointed Michael to serve on the Board of Regents of the University System of Georgia.

As Entrepreneur-in-Residence for the KSU MBA 2013 spring semester, Coles led a class: “Concept to Counter.” He helped students grasp the concept of taking creative thoughts and ideas to the marketplace.

Coles received the National Women’s Political Caucus “Good Guy of the Year” for his advocacy of women’s issues.

Authoring Time to Get Tough and Keynote Speaking
On October 17, 2018, Coles officially launched his new book titled “Time to Get Tough: How Cookies Coffee and a Crash Led To Success in Business and Life.” All proceeds from the book and speaker fees are donated to a fund through Kennesaw State University.

Today, Coles delivers keynotes to students, organizations and at corporate events across the country. He is a member of The Jackson Hole Rotary Club.

Coles continues to serve on numerous non-profit boards and lives in Jackson Hole, Wyoming with his wife Donna. They are the parents of three adult children and seven grandchildren.