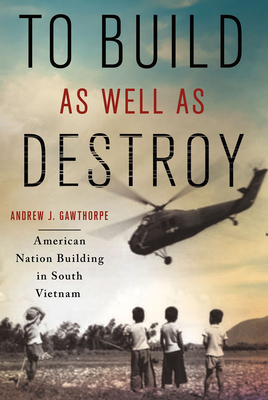 To Build as Well as Destroy: American Nation Building in South Vietnam

For years, the so-called better-war school of thought has argued that the United States built a legitimate and viable non-Communist state in South Vietnam in the latter years of the Vietnam War and that it was only the military abandonment of this state that brought down the Republic of Vietnam. But Andrew J. Gawthorpe, through a detailed and incisive analysis, shows that, in fact, the United States failed in its efforts at nation building and had not established a durable state in South Vietnam.

Drawing on newly opened archival collections and previously unexamined oral histories with dozens of U.S. military officers and government officials, To Build as Well as Destroy demonstrates that the United States never came close to achieving victory in the late 1960s and early 1970s. Gawthorpe tells a story of policy aspirations and practical failures that stretches from Washington, D.C., to the Vietnamese villages in which the United States implemented its nationbuilding strategy through the Office of Civil Operations and Revolutionary Development Support known as CORDS. Structural factors that could not have been overcome by the further application of military power thwarted U.S. efforts to build a viable set of non-Communist political, economic, and social institutions in South Vietnam.

To Build as Well as Destroy provides the most comprehensive account yet of the largest and best-resourced nation-building program in U.S. history. Gawthorpe's analysis helps contemporary policy makers, diplomats, and military officers understand the reasons for this failure. At a moment in time when American strategists are grappling with military and political challenges in Afghanistan, Iraq, and Syria, revisiting the historical lessons of Vietnam is a worthy endeavor.

To Build as Well as Destroy: American Nation Building in South Vietnam

I am a scholar of modern American history and foreign policy. While my work is mainly historical in nature, it is driven by a fascination with how the contemporary is shaped by the past.

I have published extensively on the Vietnam War, including a book, To Build as well as Destroy: The American Experience of Nation-Building in South Vietnam, available from Cornell University Press.  My research has also been published in The Historical Journal, The Journal of Cold War Studies, The Journal of Strategic Studies, and Small Wars & Insurgencies.

I am a passionate teacher and public communicator. In 2019, I received the Institute for History’s biannual teaching prize, the Carla Musterd Award. I was also previously nominated for the teaching prize of the Faculty of Humanities. I consider public communication to be a vital part of a scholar’s role and frequently publish opinion pieces and op-eds. My writing has been published on every continent, including in The Guardian, Foreign Affairs, The Los Angeles Times, and many more outlets.  I also host a podcast called America Explained.

Prior to working at Leiden, I was a Postdoctoral Research Fellow in the Harvard Kennedy School, a Teaching Fellow at the UK Defence Academy, and a civil servant in the British Cabinet Office. I received my graduate training at the University of Cambridge and King’s College London.