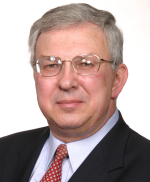 Henry Petroski is a civil engineering professor at Duke University where he specializes in failure analysis.

Petroski was born in Brooklyn, New York, and in 1963, he received his bachelor's degree from Manhattan College. He graduated with his Ph.D. in Theoretical and Applied Mechanics from the University of Illinois at Urbana-Champaign in 1968. Before beginning his work at Duke in 1980, he worked at the University of Texas at Austin from 1968-74 and for the Argonne National Laboratory from 1975-80.

He has received honorary degrees from Clarkson University, Trinity College, Valparaiso University and Manhattan College. He is a registered professional engineer in Texas, a Fellow of the American Society of Civil Engineers, and a member of the American Academy of Arts and Sciences and the National Academy of Engineering.

In 2004, he was appointed to the United States Nuclear Waste Technical Review Board.

When something fails we are quick to blame the design or engineers that built them but upon a closer look a wider canvas emerges that often leads to other issues.

Engineering is exciting to general public when it works but gets intriguing when it fails. In an interview with Readara, author and professor Henry Petroski chronicles the well-publicized civil engineering failures of recent times including swaying of bridges, corrosion of concrete, space shuttle blow out, and the sinking of Titanic.

Most engineers are generally not aware of history of engineering and engineering knowledge is not always cumulative. The book highlight scores of bridge disasters and offers methodical descriptions of several recent failures including the Gulf of Mexico oil spill.

No engineer wants to design that will not succeed but it is the failure that brings improvement and moves engineering forward.