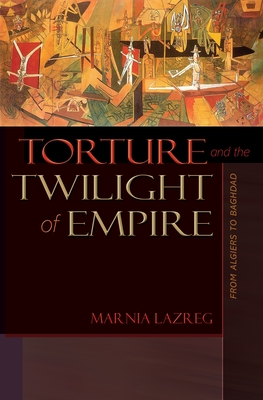 Torture and the Twilight of Empire: From Algiers to Baghdad

Torture and the Twilight of Empire looks at the intimate relationship between torture and colonial domination through a close examination of the French army's coercive tactics during the Algerian war from 1954 to 1962. By tracing the psychological, cultural, and political meanings of torture at the end of the French empire, Marnia Lazreg also sheds new light on the United States and its recourse to torture in Iraq and Afghanistan.

This book is nothing less than an anatomy of torture--its methods, justifications, functions, and consequences. Drawing extensively from archives, confessions by former torturers, interviews with former soldiers, and war diaries, as well as writings by Jean-Paul Sartre, Albert Camus, and others, Lazreg argues that occupying nations justify their systematic use of torture as a regrettable but necessary means of saving Western civilization from those who challenge their rule. She shows how torture was central to guerre r�volutionnaire, a French theory of modern warfare that called for total war against the subject population and which informed a pacification strategy founded on brutal psychological techniques borrowed from totalitarian movements. Lazreg seeks to understand torture's impact on the Algerian population--especially women--and also on the French troops who became their torturers. She explores the roles Christianity and Islam played in rationalizing these acts, and the ways in which torture became not only routine but even acceptable.

Written by a preeminent historical sociologist, Torture and the Twilight of Empire holds particularly disturbing lessons for us today as we carry out the War on Terror.

Torture and the Twilight of Empire: From Algiers to Baghdad

Marnia Lazreg is professor of sociology at Hunter College. She is a graduate of the University of Algiers from which she received a Baccalaureate in Mathematics, and Philosophy as well as a licence-ès-Lettres, with three distinctions.  She also received an MA and a Ph.D. in sociology from New York University.   She was awarded fellowships at the Pembroke Center for Teaching and Research on Women (Brown University); the Bunting Institute (Harvard); The Institute for Advanced Study (Princeton), the Rockefeller Bellagio Center, Italy, as well as a Fulbright grant to Algeria.   Her research focuses on the structures that inform cultural change as well as shape conceptions of self, identity and gender relations in societies undergoing the transition from colonial and/or economic dependence to political sovereignty. A parallel interest is to identify and theorize the frequent gap between theoretical concepts applied to non-Western societies and the reality they intend to explain, which may hamper cross cultural understanding.

Her early study addressed the socio-cultural shocks experienced by Algeria in the aftermath of its decolonization, and culminated in the publication of her first book, The Emergence of Classes in Algeria:  A Study of Colonialism and Socio-Political Change (Westview, 1976).  Her encounter with the feminist movement in the United States led to her writing of what is now a classic, widely used in the English-speaking world, The Eloquence of Silence: Algerian Women in Question (Routledge, 1996).

Intrigued by the antinomy between humanism, human rights and the widespread use of torture in the past decade, she undertook a case study of the systematic use of torture by the French military during the Algerian war (1954-62).  Torture and the Twilight of Empire: From Algiers to Baghdad (Princeton 2008) has received wide acclaim.

Her interest in the reveiling movement that spread throughout the Muslim world helped to crystallize the relationship between the neo-colonial character of contemporary geopolitics, war and gender. Questioning the Veil: Open Letters to Muslim women (Princeton, 2010) historicizes and demystifies reveiling by exploring the main (largely mundane) reasons invoked for its occurrence.

In addition to books, she is also the author of numerous articles and chapters in anthologies. In continuity with her interest in culture, he has recently completed a manuscript on Michel Foucault’s struggles with how to theorize cultural difference.  Her central question is to determine how it is that a most inspiring social philosopher defined non-Western rationality as a “limit-experience” for Western reason? How did such a view affect his sojourn in Tunis, his reporting on Iran and his interaction with people in Japan?

Apart from teaching, she has served as consultant on gender and development for the United Nations Development Program as well as UNESCO.  She has also worked as the coordinator for Europe and Central Asia at the World Bank wile also doing cross support work on the Middle East and North Africa.

She has given keynote lectures and spoken at conferences in the United States, Europe, the Middle East and Africa.  She has appeared on television and given numerous radio interviews.

Her work has been translated into Arabic, French, German, Italian, Spanish, and Turkish.