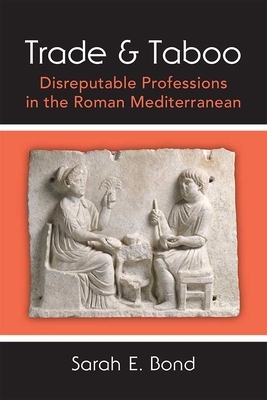 Trade and Taboo: Disreputable Professions in the Roman Mediterranean

Trade and Taboo addresses the legal, literary, social, and institutional creation of disrepute in ancient Roman society. Tracking the shifting application of stigmas of disrepute between the Republic and Late Antiquity, it follows particular groups of professionals--funeral workers, criers, tanners, mint workers, and even bakers--asking how they coped with stigmatization.

In this book, Sarah E. Bond reveals the construction and motivations for these attitudes, and to show how they created inequalities, informed institutions, and changed over time. Additionally, she shows how political and cultural shifts mutated these taboos, reshaping economic markets and altering the status of professionals at work within these markets.

Bond investigates legal stigmas in the form of infamia and other marks of legal disrepute. She expands on anthropological theories of pollution, closely studying individuals who regularly came into contact with corpses and other polluting materials, and considering communication and network formation through the disrepute attached to town criers, or praecones. Ideas of disgust and the language of invective are brought forward looking at tanners. The book closes with an exploration of caste-like systems created in the later Roman Empire. Collectively, these professionals are eloquent about economies and changes experienced within Roman society between 45 BCE and 565 CE.

Trade and Taboo will interest those studying Roman society, issues of historiographical method, and the topic of taboo in preindustrial cultures.

Trade and Taboo: Disreputable Professions in the Roman Mediterranean

Sarah E. Bond is an Associate Professor of History at the University of Iowa and the Director of Undergraduate Studies. She is interested in late Roman history, epigraphy, late antique law, Roman topography and GIS, Digital Humanities, and the socio-legal experience of ancient marginal peoples.

Her book, Trade and Taboo: Disreputable Professionals in the Roman Mediterranean, was published with the University of Michigan Press in 2016.

Source: The University of Iowa College of Liberal Arts and Sciences