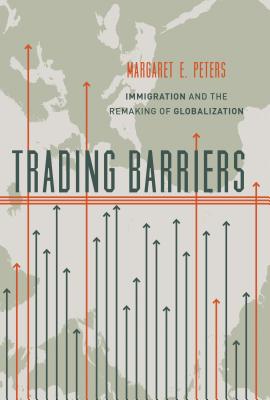 Trading Barriers: Immigration and the Remaking of Globalization

Why have countries increasingly restricted immigration even when they have opened their markets to foreign competition through trade or allowed their firms to move jobs overseas? In Trading Barriers, Margaret Peters argues that the increased ability of firms to produce anywhere in the world combined with growing international competition due to lowered trade barriers has led to greater limits on immigration.

Peters explains that businesses relying on low-skill labor have been the major proponents of greater openness to immigrants. Immigration helps lower costs, making these businesses more competitive at home and abroad. However, increased international competition, due to lower trade barriers and greater economic development in the developing world, has led many businesses in wealthy countries to close or move overseas. Productivity increases have allowed those firms that have chosen to remain behind to do more with fewer workers. Together, these changes in the international economy have sapped the crucial business support necessary for more open immigration policies at home, empowered anti-immigrant groups, and spurred greater controls on migration.

Trading Barriers: Immigration and the Remaking of Globalization

Margaret Peters is an Associate Professor in the Department of Political Science at UCLA.  Her research focuses broadly on international political economy with a special focus on the politics of migration.   Her book, Trading Barriers: Immigration and the Remaking of Globalization (2017, Princeton University Press) examines the relationship between trade policy, outsourcing, and immigration policy and received the Lowi award for the best first book from APSA and IPSA,  and the Best Book Award from the IPE and Ethnicity, Nationalism, and Migration Sections of the International Studies Associations and the Migration and Citizenship section of APSA.

Prior to coming to UCLA, she was an Assistant Professor in the Political Science department at Yale University and at the  University of Wisconsin-Madison.  She earned her Ph.D. from Stanford University in 2011. Her work has appeared in International Organization, World Politics, and BJPS, among others. She teaches classes on international political economy and migration.