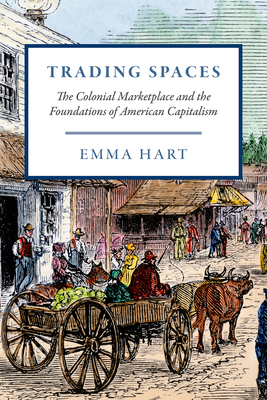 Trading Spaces: The Colonial Marketplace and the Foundations of American Capitalism

When we talk about the economy, the market is often just an abstraction. While the exchange of goods was historically tied to a particular place, capitalism has gradually eroded this connection to create our current global trading systems. In Trading Spaces, Emma Hart argues that Britain's colonization of North America was a key moment in the market's shift from place to idea, with major consequences for the character of the American economy.

Hart's book takes in the shops, auction sites, wharves, taverns, fairs, and homes of seventeenth- and eighteenth-century America--places where new mechanisms and conventions of trade arose as Europeans re-created or adapted continental methods to new surroundings. Since those earlier conventions tended to rely on regulation more than their colonial offspring did, what emerged in early America was a less fettered brand of capitalism. By the nineteenth century this had evolved into a market economy that would not look too foreign to contemporary Americans. To tell this complex transnational story of how our markets came to be, Hart looks back farther than most historians of US capitalism, rooting these markets in the norms of seventeenth- and eighteenth-century Britain. Perhaps most important, this is not a story of specific commodity markets over time but rather is a history of the trading spaces themselves: the physical sites in which the grubby work of commerce occurred and where the market itself was born.

Trading Spaces: The Colonial Marketplace and the Foundations of American Capitalism

Her major research interests lie in urban history, social, and economic history, as well as in the intersections of history, material culture, urban studies, geography and sociology. She has written two books; Building Charleston: Town and Society in the Eighteenth-Century British Atlantic World (UVA Press, 2010/University of South Carolina Press, 2015) and Trading Spaces: The Colonial Marketplace and the Foundations of American Capitalism (University of Chicago Press, 2019).

Additionally she has published scholarly articles in, among other places, The William and Mary Quarterly, Early American Studies, The Journal of Southern History, Urban History (where she co-edited a special issue on early modern cities and globalization with Mariana Dantas), Eighteenth-Century Studies, and The Journal of Urban History. Her essays are also part of The Cambridge History of America and the World (2021), and The Cambridge History of the American Revolution (forthcoming).

Professor Hart is currently developing two new research projects. The first is a biography of the eighteenth-century Scottish novelist, historian, and essayist, Tobias Smollett. The project will use Smollett’s life and work as a means of exploring Britons’ seemingly endless search for collective identity and a place on the world stage.

The second, a long history of America’s urban-rural divide, traces the evolution of this discourse of division that exists not only in the United States but also in other Atlantic-facing nations such as Britain and France. She is a founding board member of the Global Urban History Project https://www.globalurbanhistory.org/, a transnational online collective of scholars who research the history of the city as a space and as an agent of globalization.

Her work has been supported by the United Kingdom’s Arts and Humanities Research Council, the McNeil Center for Early American Studies’ Barra Sabbatical Fellowship, the Huntington Library, The Program in Early American Economy and Society at the Library Company of Philadelphia, The Robert H. Smith International Center for Jefferson Studies at Monticello, and the Museum of Early Southern Decorative Arts.

In 2015 she was elected as a fellow of the Royal Historical Society.