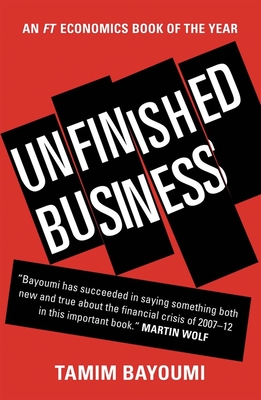 Unfinished Business: The Unexplored Causes of the Financial Crisis and the Lessons Yet to Be Learned

A penetrating critique tracing how under-regulated trading between European and U.S. banks led to the 2008 financial crisis--with a prescription for preventing another meltdown

There have been numerous books examining the 2008 financial crisis from either a U.S. or European perspective. Tamim Bayoumi is the first to explain how the Euro crisis and U.S. housing crash were, in fact, parasitically intertwined.

Starting in the 1980s, Bayoumi outlines the cumulative policy errors that undermined the stability of both the European and U.S. financial sectors, highlighting the catalytic role played by European mega banks that exploited lax regulation to expand into the U.S. market and financed unsustainable bubbles on both continents. U.S. banks increasingly sold sub-par loans to under-regulated European and U.S. shadow banks and, when the bubbles burst, the losses whipsawed back to the core of the European banking system. A much-needed, fresh look at the origins of the crisis, Bayoumi's analysis concludes that policy makers are ignorant of what still needs to be done both to complete the cleanup and to prevent future crises.

Unfinished Business: The Unexplored Causes of the Financial Crisis and the Lessons Yet to Be Learned

Tamim Bayoumi was a senior fellow at the Peterson Institute for International Economics from November 2015 to October 2016, while he was on leave from the International Monetary Fund, where he has been affiliated since 1988. While at the Fund, he participated in surveillance teams on the United States, Japan, and Canada and led the division that produces the World Economic Outlook and the division responsible for Fund analysis of exchange rates and the development of large macroeconomic models.

He has also been responsible for reviewing Fund policy advice to a wide range of mainly G-20 economies including, Brazil, China, the euro area, Germany, and India. More recently, Bayoumi has been involved in overseeing the Fund’s surveillance strategy, including leading the Fund’s work on trade; on the Fund’s internal assessment of global and country vulnerabilities, including setting up the Fund’s internal early warning exercise; on integrating natural disasters into the surveillance framework; and the work on the Managing Director’s Global Policy Agenda, a document that summarizes both the economic situation and the Fund’s policy advice moving forward.

Bayoumi focused his time at the Institute writing a book on the deep origins of the 2008–11 financial crises in the United States and Europe. In addition, he continued his analysis of macrofinancial issues, including the impact of unconventional monetary policies on the rest of the world and the reasons for fat tails and high correlations at those tails in international asset prices. He also analyzed the evolving trade landscape given the rise of global value chains (including their implications for real effective exchange rates and measures of openness) and large regional trade agreements such as the Trans-Pacific Partnership.

Bayoumi has published on a wide range of subjects, including optimum currency areas, fiscal policy (including the impact of automatic stabilizers), global financial linkages, large models, and policy coordination. In particular, he coauthored with Barry Eichengreen an influential analysis of the suitability of Europe for a single currency. Recent publications include a book on policy cooperation after the crisis, coedited with Stephen Pickford and Paola Subacchi, and an analysis of the impact of foreign intervention and quantitative easing on current accounts (with Joseph E. Gagnon and others).

Bayoumi has an undergraduate degree from the University of Cambridge and a PhD from Stanford University.