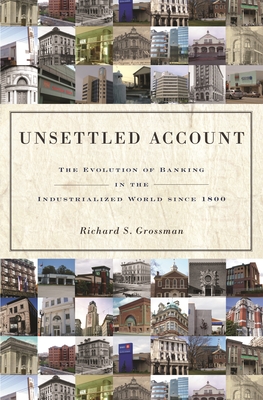 Unsettled Account: The Evolution of Banking in the Industrialized World Since 1800

Commercial banks are among the oldest and most familiar financial institutions. When they work well, we hardly notice; when they do not, we rail against them. What are the historical forces that have shaped the modern banking system? In Unsettled Account, Richard Grossman takes the first truly comparative look at the development of commercial banking systems over the past two centuries in Western Europe, the United States, Canada, Japan, and Australia. Grossman focuses on four major elements that have contributed to banking evolution: crises, bailouts, mergers, and regulations. He explores where banking crises come from and why certain banking systems are more resistant to crises than others, how governments and financial systems respond to crises, why merger movements suddenly take off, and what motivates governments to regulate banks.

Grossman reveals that many of the same components underlying the history of banking evolution are at work today. The recent subprime mortgage crisis had its origins, like many earlier banking crises, in a boom-bust economic cycle. Grossman finds that important historical elements are also at play in modern bailouts, merger movements, and regulatory reforms.

Unsettled Account is a fascinating and informative must-read for anyone who wants to understand how the modern commercial banking system came to be, where it is headed, and how its development will affect global economic growth.

Unsettled Account: The Evolution of Banking in the Industrialized World Since 1800

Richard Grossman conducts research in economic history, although the questions he pursues are inspired by current policy issues in macroeconomics, banking, and finance. In particular, he focus on the links between the financial sector and aggregate economic activity and on how economic and political forces shape financial structure.  He writes regularly about contemporary and historical economics.

Richard S. Grossman is Professor of Economics at Wesleyan University in Middletown, CT and a Visiting Scholar at the Institute for Quantitative Social Science at Harvard University. He is the author of Unsettled Account: The Evolution of Banking in the Industrialized World since 1800 (Princeton University Press, 2010) and WRONG: Nine Economic Policy Disasters and What We Can Learn from Them (Oxford University Press, 2013). He teaches classes in American and European Economic History, Macroeconomics, and Money and Banking. He graduated magna cum laude from Harvard College, holds an M.Sc.Econ. degree in Economic History from the London School of Economics and Political Science of the University of London, and A.M. and Ph.D. degrees in Economics from Harvard University.

Prior to joining the faculty at Wesleyan, he worked as an international economist at the United States Department of State. He has held visiting faculty appointments at Harvard, Yale, and the Hebrew University of Jerusalem, and has received research support from the National Science Foundation and the German Marshall Fund of the United States and was a 2013 Fellow of the John Simon Guggenheim Memorial Foundation.

He has worked and consulted on Wall Street and has testified as an expert witness in federal court. He has been published in the American Economic Review, Journal of Economic History, Journal of Money, Credit, and Banking, Journal of Financial and Quantitative Analysis, and other scholarly journals. His op-eds have appeared in the Wall Street Journal, Boston Globe, USA Today, and other newspapers and he has appeared on local, national, and foreign radio and TV.

He is a research fellow at the Centre for Economic Policy Research in London, a research network fellow of CESifo in Munich, a member of the International Advisory Board of the Queen’s University Centre for Economic History in Belfast, and an associate editor for socioeconomics, health policy, and law at the journal Neurosurgery.