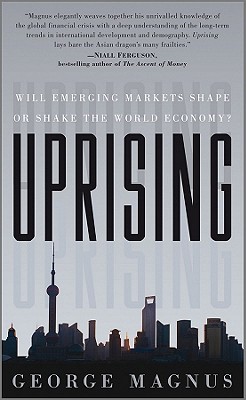 Uprising: Will Emerging Markets Shape or Shake the World Economy?

Emerging markets are big news. But after the financial crisis, what does the future really hold for them? And what does this future mean for global business?

George Magnus, one of the world's most respected economic analysts, is your guide through the challenges and opportunities for emerging markets and those doing business in them.

This magisterial book looks in detail at China and India - the big players - and also less hyped but crucial markets, including Eastern European countries and Turkey. Magnus takes in his sweep everything from commodity prices to climate change, and from comparative advantage to demographic to provide a compelling analysis of what the future might look like - not just for emerging markets, but for investors, businesses and economies everywhere.

Uprising is a must-read for anyone who cares about the future of the global economy.

Uprising: Will Emerging Markets Shape or Shake the World Economy?