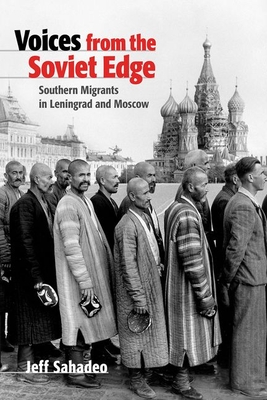 Voices from the Soviet Edge: Southern Migrants in Leningrad and Moscow

Jeff Sahadeo reveals the complex and fascinating stories of migrant populations in Leningrad and Moscow. Voices from the Soviet Edge focuses on the hundreds of thousands of Uzbeks, Tajiks, Georgians, Azerbaijanis, and others who arrived toward the end of the Soviet era, seeking opportunity at the privileged heart of the USSR. Through the extensive oral histories Sahadeo has collected, he shows how the energy of these migrants, denigrated as Blacks by some Russians, transformed their families' lives and created inter-republican networks, altering society and community in both the center and the periphery of life in the two capitals.

Voices from the Soviet Edge connects Leningrad and Moscow to transnational trends of core-periphery movement and marks them as global cities. In examining Soviet concepts such as friendship of peoples alongside ethnic and national differences, Sahadeo shows how those ideas became racialized but could also be deployed to advance migrant aspirations. He exposes the Brezhnev era as a time of dynamism and opportunity, and Leningrad and Moscow not as isolated outposts of privilege but at the heart of any number of systems that linked the disparate regions of the USSR into a whole. In the 1980s, as the Soviet Union crumbled, migration increased. These later migrants were the forbears of contemporary Muslims from former Soviet spaces who now confront significant discrimination in European Russia. As Sahadeo demonstrates, the two cities benefited from 1980s' migration but also became communities where racism and exclusion coexisted with citizenship and Soviet identity.

Voices from the Soviet Edge: Southern Migrants in Leningrad and Moscow

Jeff Sahadeo received his PhD from the University of Illinois, Urbana-Champaign, in 2000. He joined Carleton after three years teaching at the University of Tennessee-Knoxville. His teaching interests include diaspora, migration, and empire in Eastern Europe and Asia. He also works on issues of colonialism, nationality, frontiers, and borders in relations of power and the creation of identities and states. A specialist on the Caucasus and Central Asia, Dr. Sahadeo has conducted extensive work in several countries of the region.

Dr. Sahadeo’s current research focuses on the intersection between nature and society, movement and social change through a study of rivers in the Republic of Georgia. He is also researching post-conflict peacebuilding through pluralism in Eurasia.